CITA comfortably sleeps 6 guests in 3 double cabins, 1 king and 2 queens. Additionally she has a full width cinema room that doubles up as an extra cabin that can accommodate a further 4 guests, ideally children or young teens.

All 3 cabins are located on the lower deck with en-suite shower rooms.

1 x Lounge/Cinema/Cabin room:
2 beds of 220 x 260 cm each- perfect for additional guest! (Children or teens). Large 72 inch flat screen TV with entertainment system.
Shared en-suite shower room with starboard guest cabin which is used as a day head with access from the cabin and the lounge. 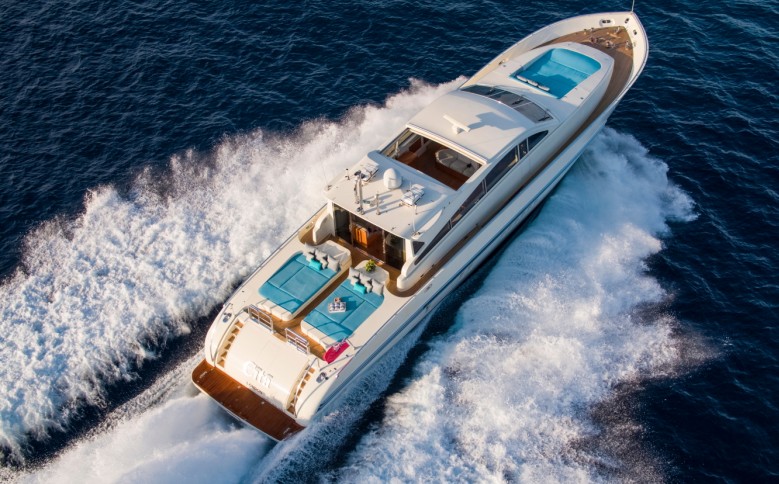 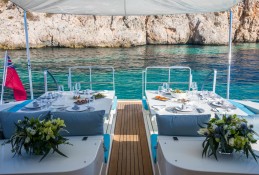 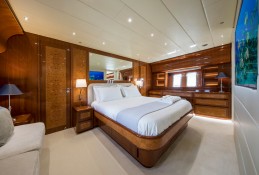 Whoever would believe that this 88′ Leopard Arno power yacht can go 36 knots!  That’s what CITA does, although 24 knots is cruising speed.  The Mediterranean has calm seas, so they can really step it into gear.  Whoever would believe she accommodates eight guests?  CITA does!   While three couples is best, there’s an extra cinema room that sleeps two, not including crew quarters, and there are three crew…. Tall, young Zach from Britain, longstanding captain aboard since 2017 is assisted by Sean, the chef from Germany, who had lovely jugs of rose-infused drinking water, prepared for our arrival, decorated with green leaves and red flowers….  It was lovely.

The third crew is a stewardess, hired seasonally, and sometimes they get an engineer as well. “An extra on call,” as Zach describes it. Owned by an American from Florida, CITA is based in Palma, Mallorca for cruises along the coast of Mallorca, which has many fine bays and ports with restaurants….  Given her speed, she is ideal for cruising to Menorca, 42 miles distant, and Ibiza, another 40 miles beyond that, which would take the yacht just four hours to complete the whole journey.

Offering indoor / outdoor living, the air conditioned saloon roof slides open and has two beige couches on opposite sides of the room with four steering chairs forward.  Wood floors and picture windows create natural light.  Zach tells me there is a wonderful sound system onboard, and the saloon has a 47″ TV as well.

You enter below straight into the cinema, or second saloon, or media room that is the full beam of the vessel, where there are two couches facing a TV.  Four chrome ports let in views from the sea.  The interiior paneling is shiny Wengi wood; the floors are teak with inlaid compass rose – stunning!

The yacht is best for three couples, as there are three private Queen guest cabins, but the cinema has beds for up to two additional guests, if necessary.  The master cabin is the full width of the vessel with shiny wengi wood and leopard sculpture. The bathroom befits a master stateroom with two modern sinks and vanity.  Two double queen cabins, each have bathroom with shower.  All the cabins have TV and air conditioning.

Whoever would believe that CITA is an RYA training center with qualifications to train guests in high standards of seamanship and navigation?  She is.  This enables guests to use the jet ski aboard, which they stow in the “garage” in the transom with snorkeling gear, Williams tender, and water ski equipment.  The yacht has a swim platform with fresh water outdoor shower.

Learn about the sea and Balearic Island culture from Zach and his crew.  Refitted in 2017, the yacht is in mint condition, and Zach and Sean have many years of experience, operating this yacht in this area….

Details are given in good faith and thought to be reliable but are not guaranteed.