Sleeps 10 in 5 cabins, two identical main deck Queens with balcony and windows, two to starboard below each with queen berth, and 1 Twin aft to port, all with private bathrooms, stall showers, AC, and Wi-Fi. The crew sleep forward to port and will swap the Queen for the Twin, if guests require. 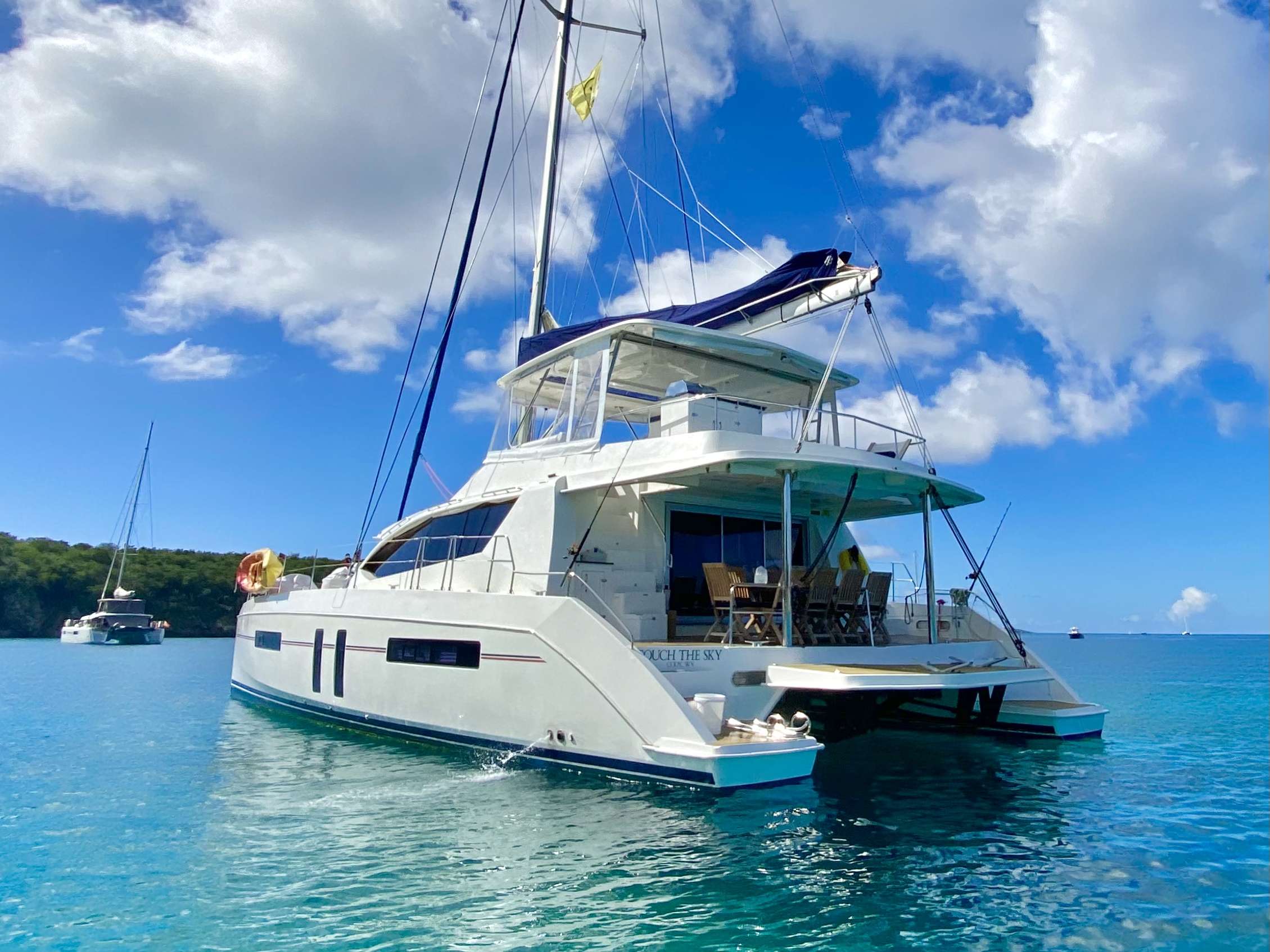 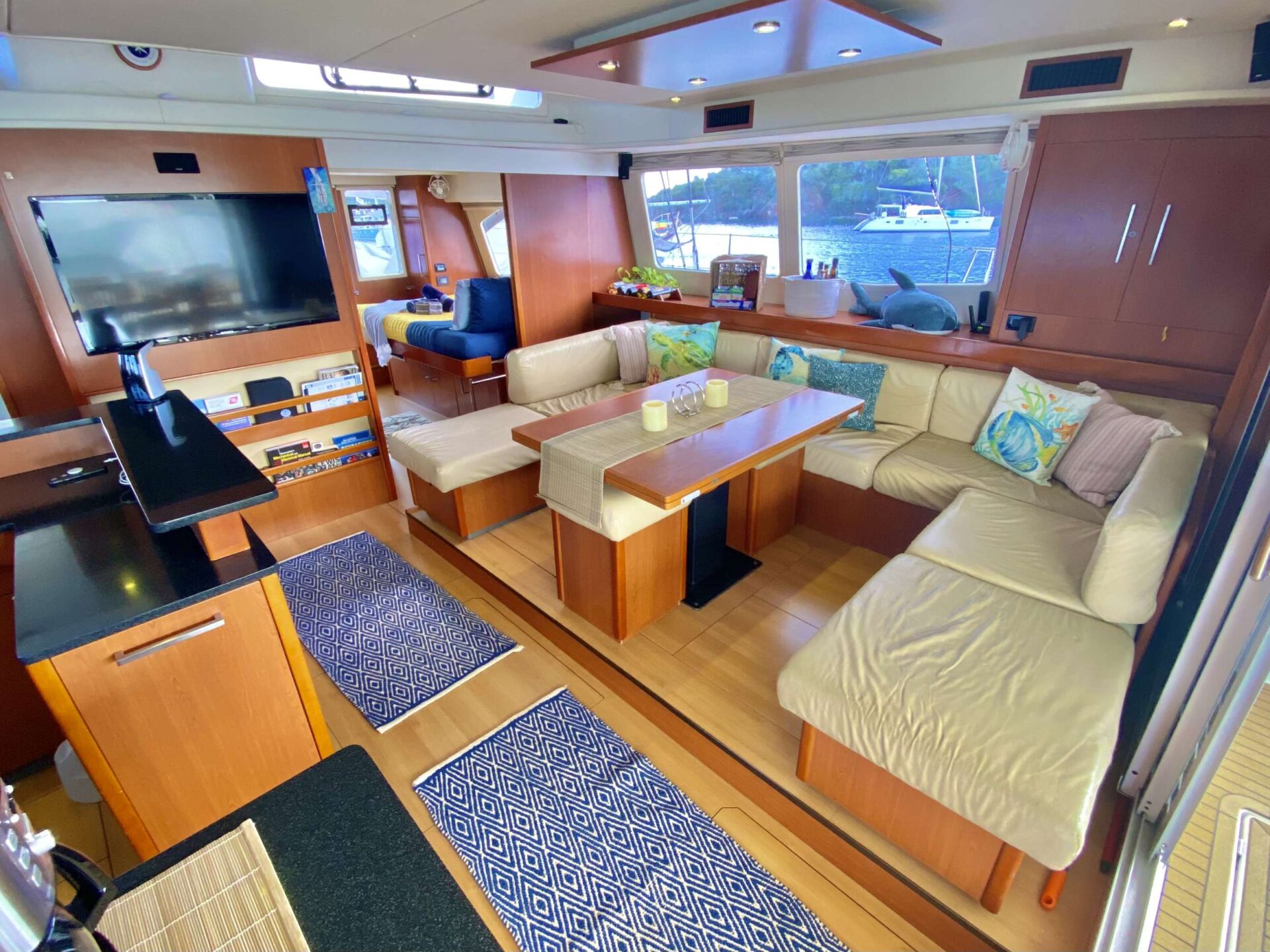 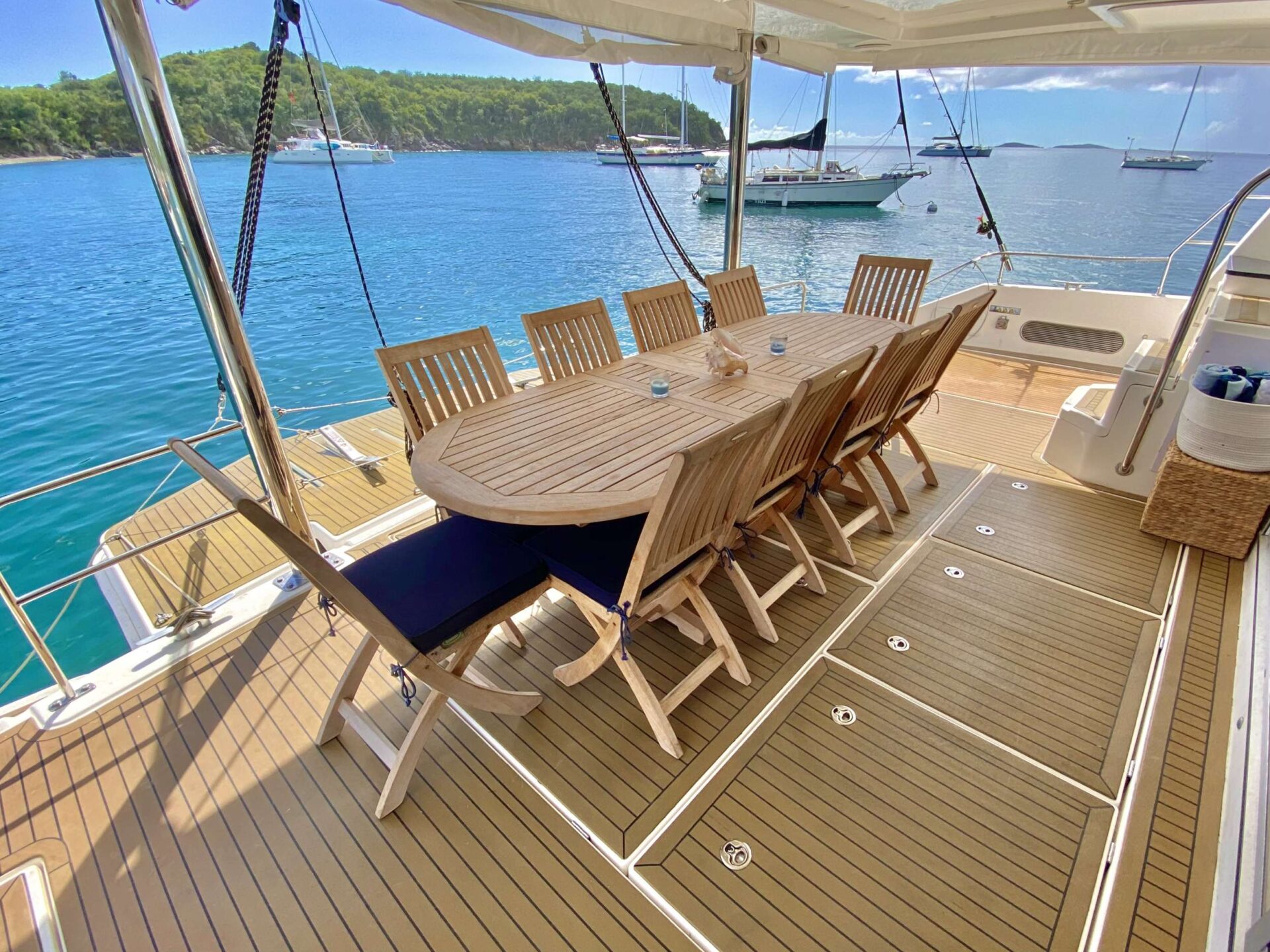 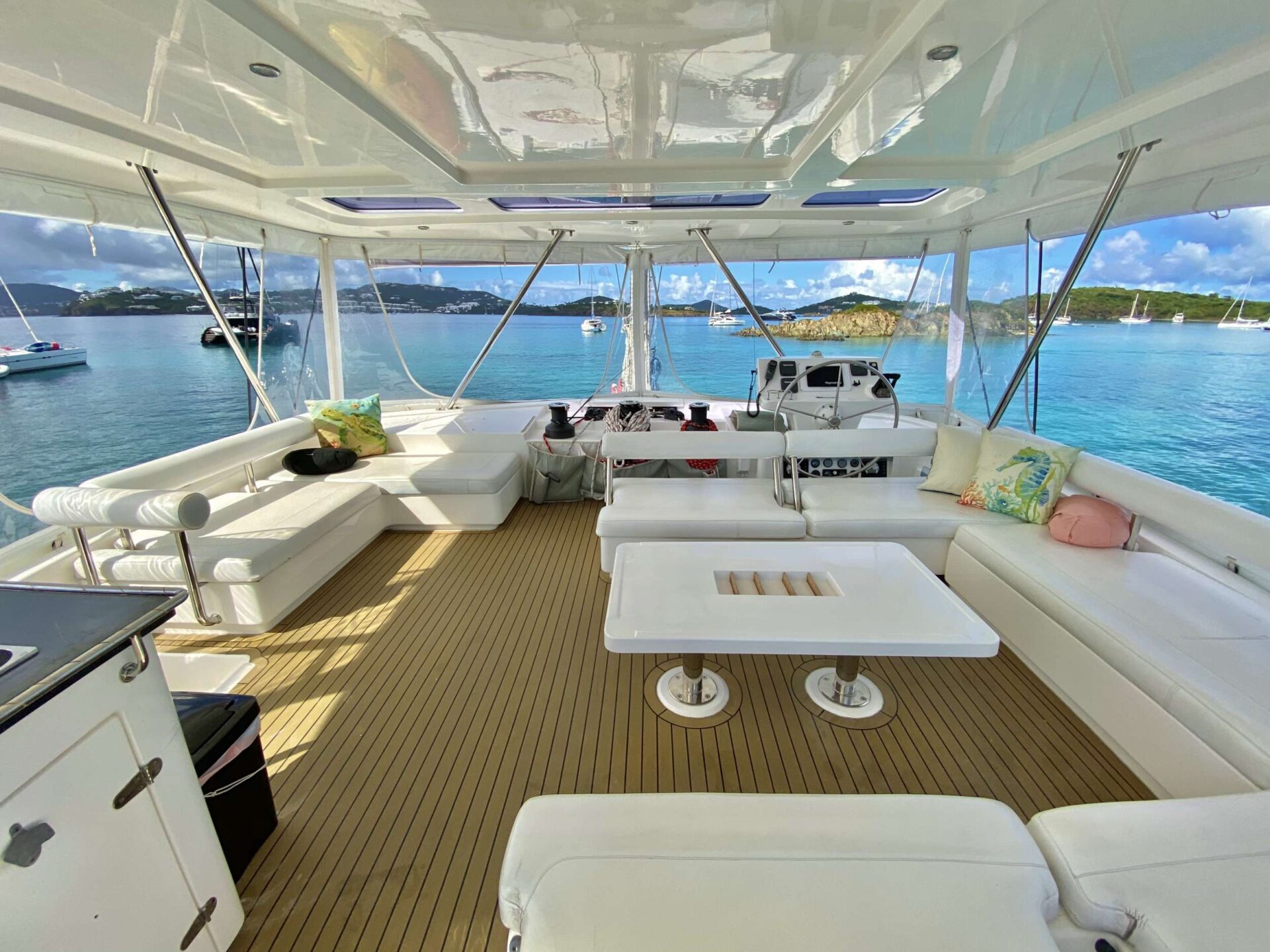 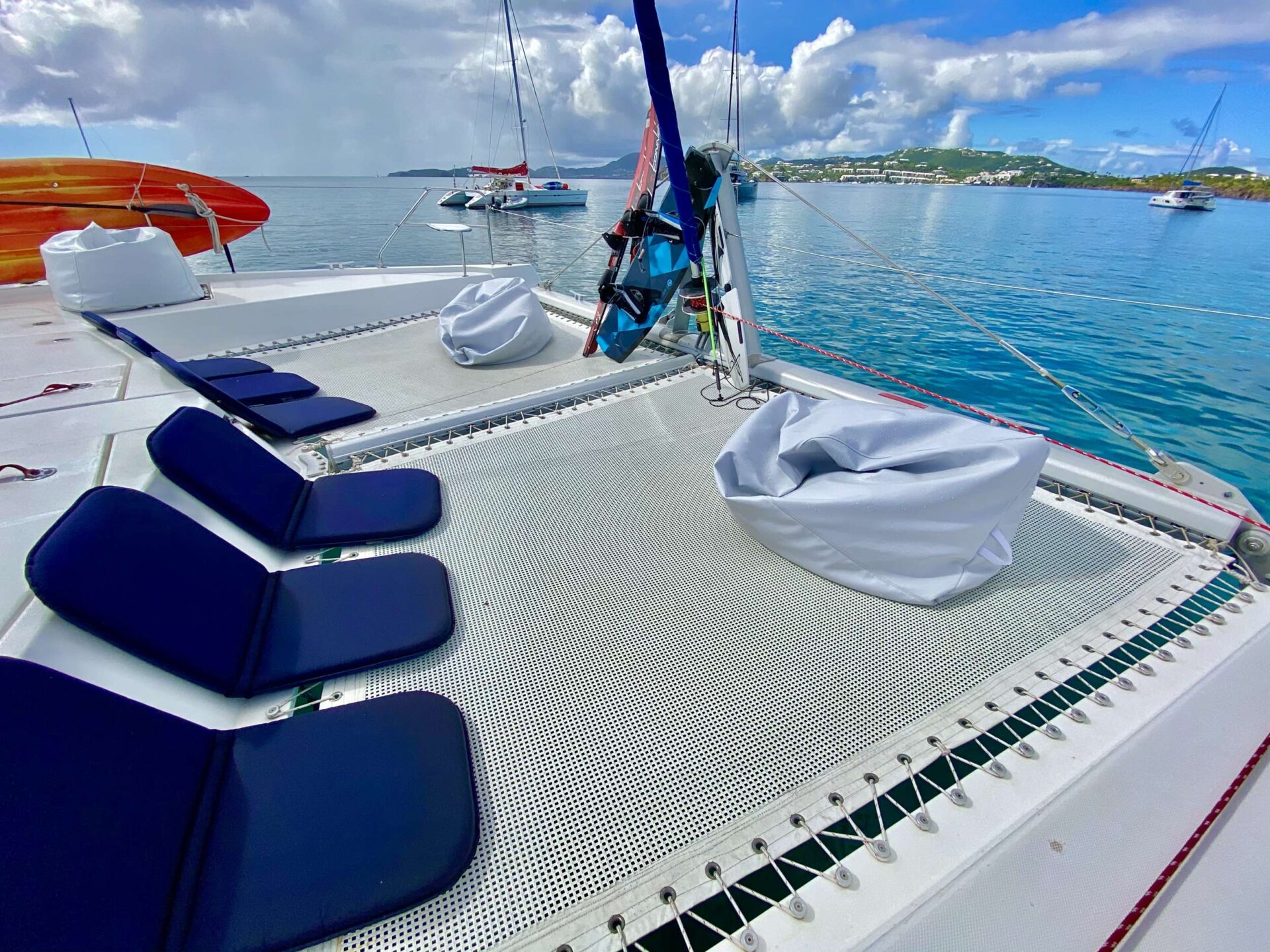 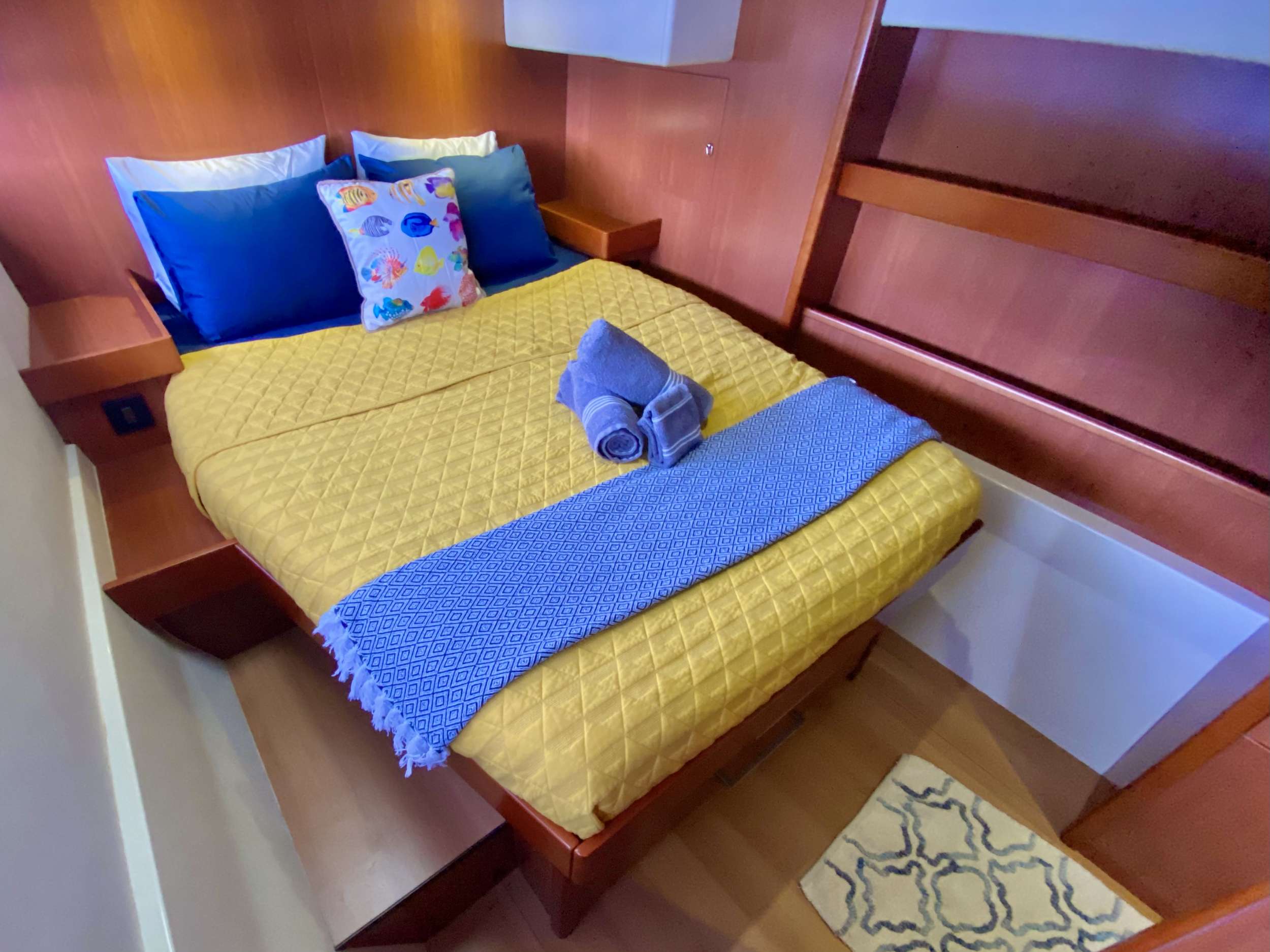 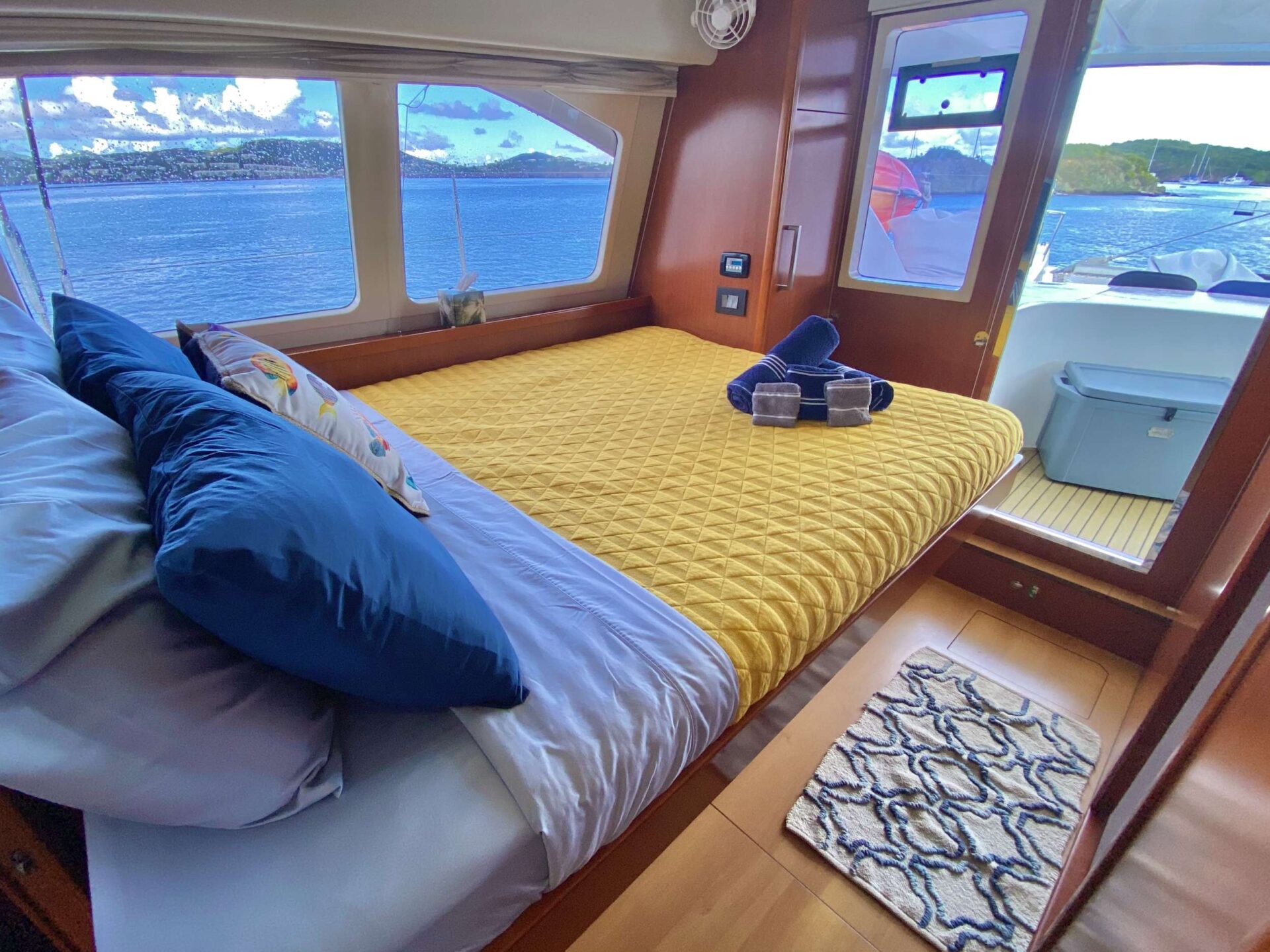 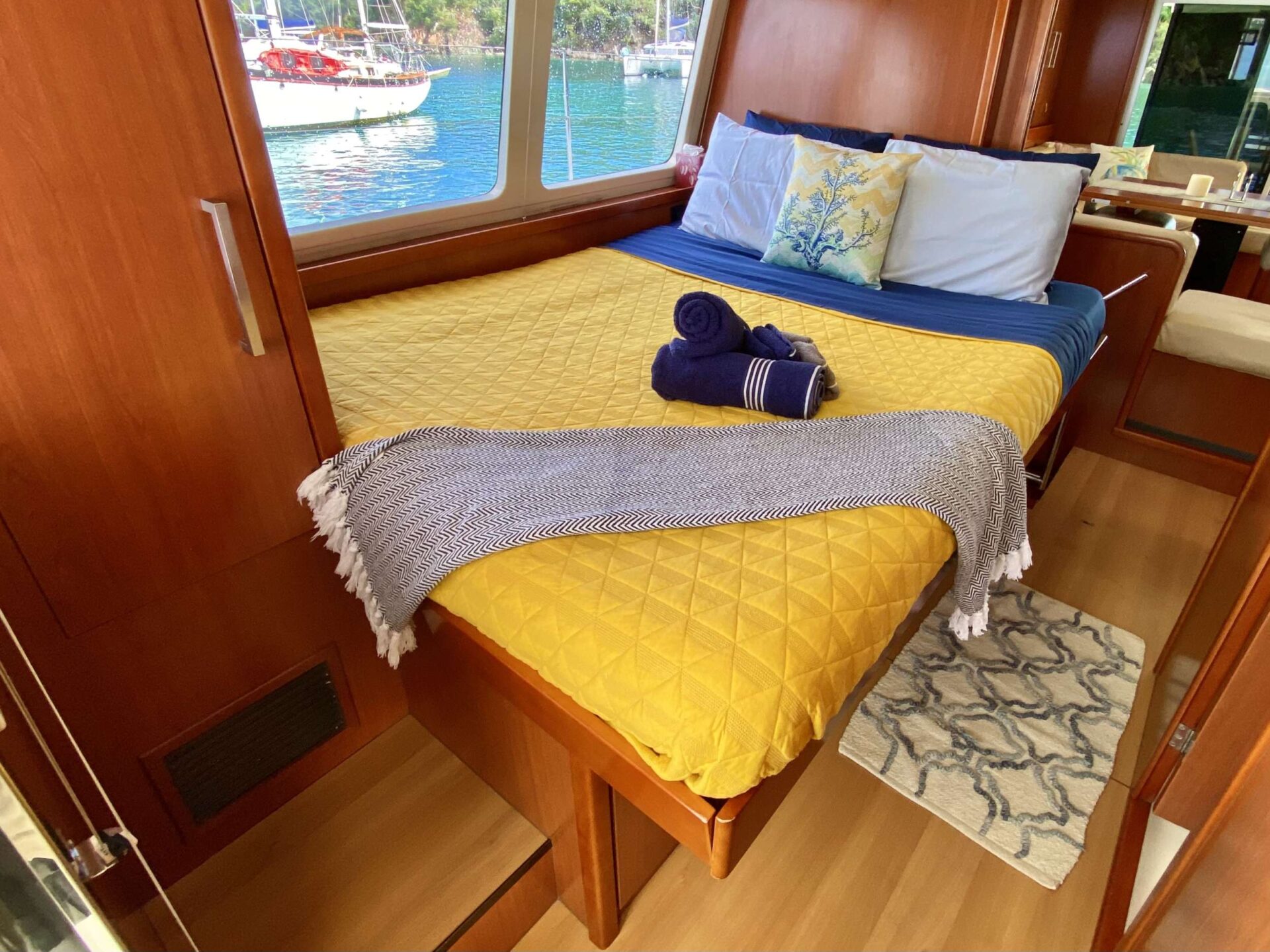 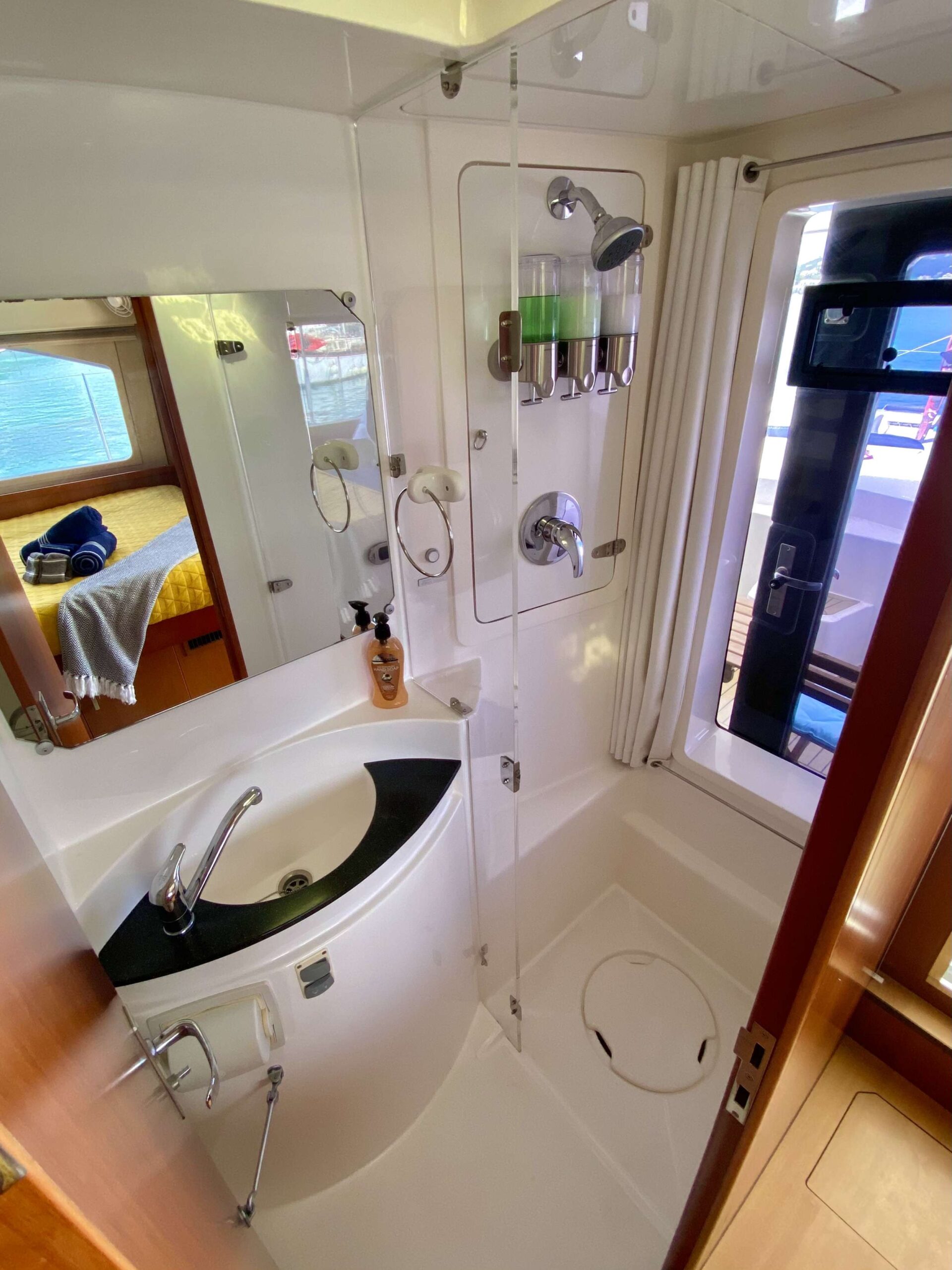 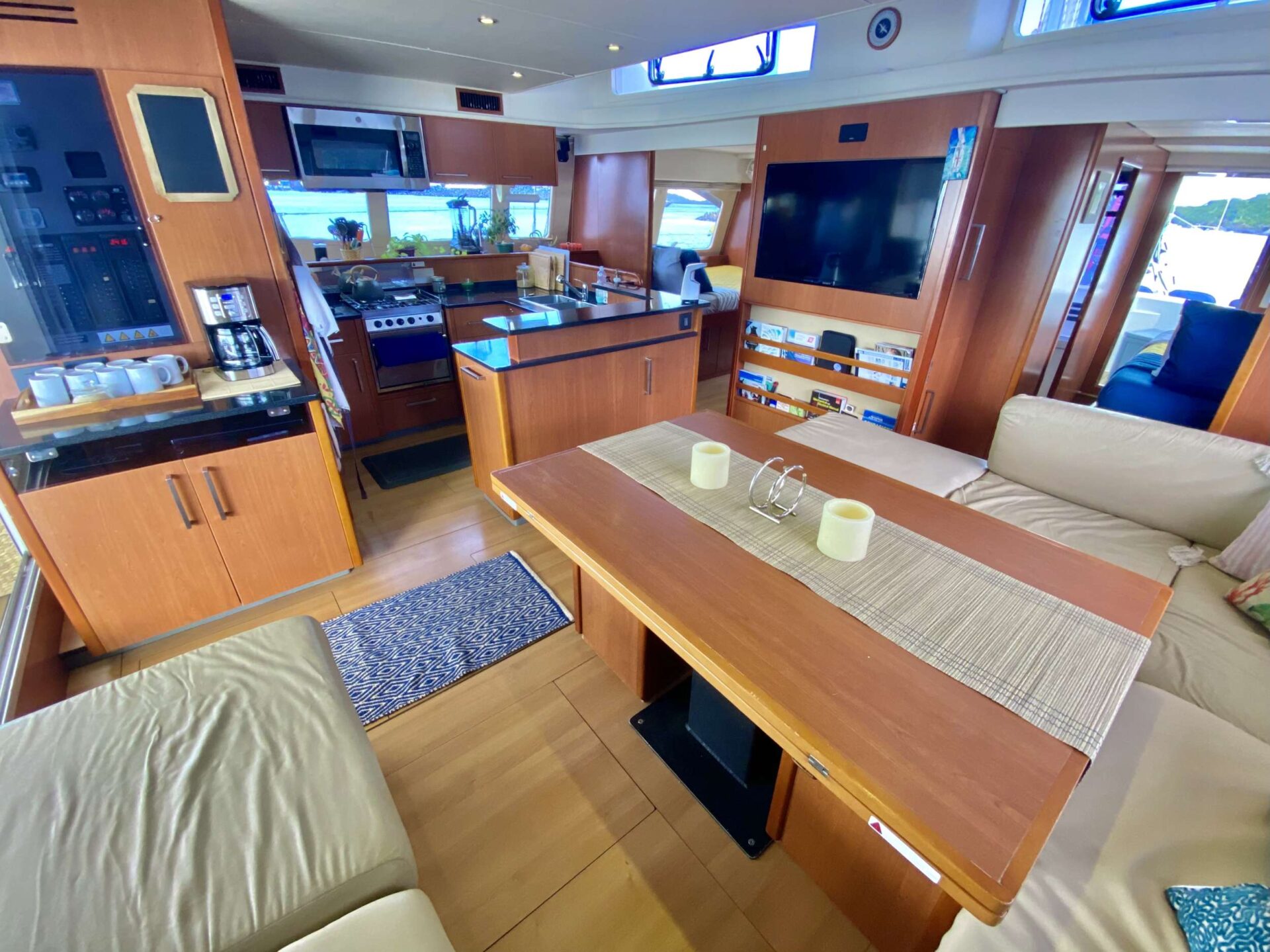 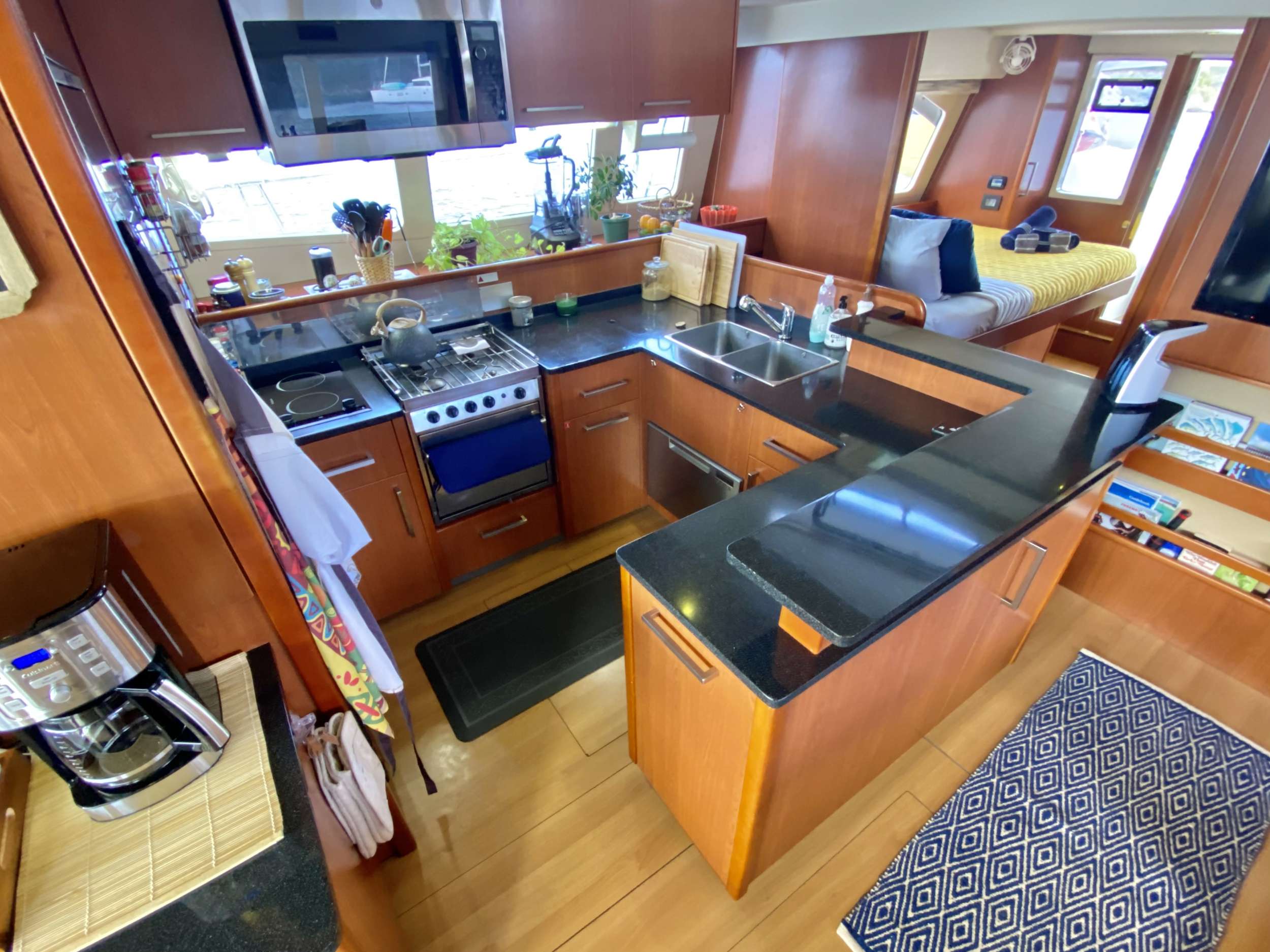 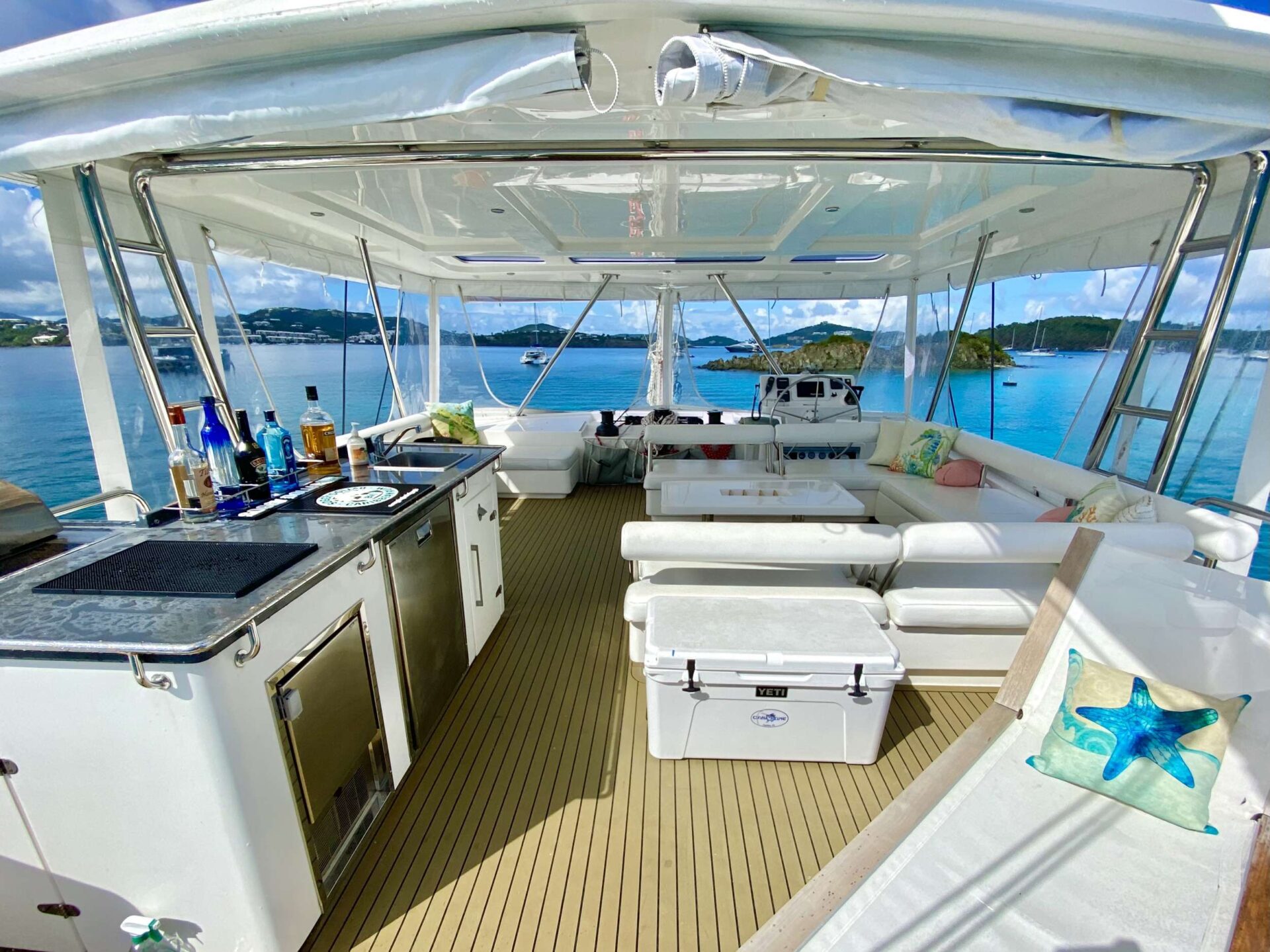 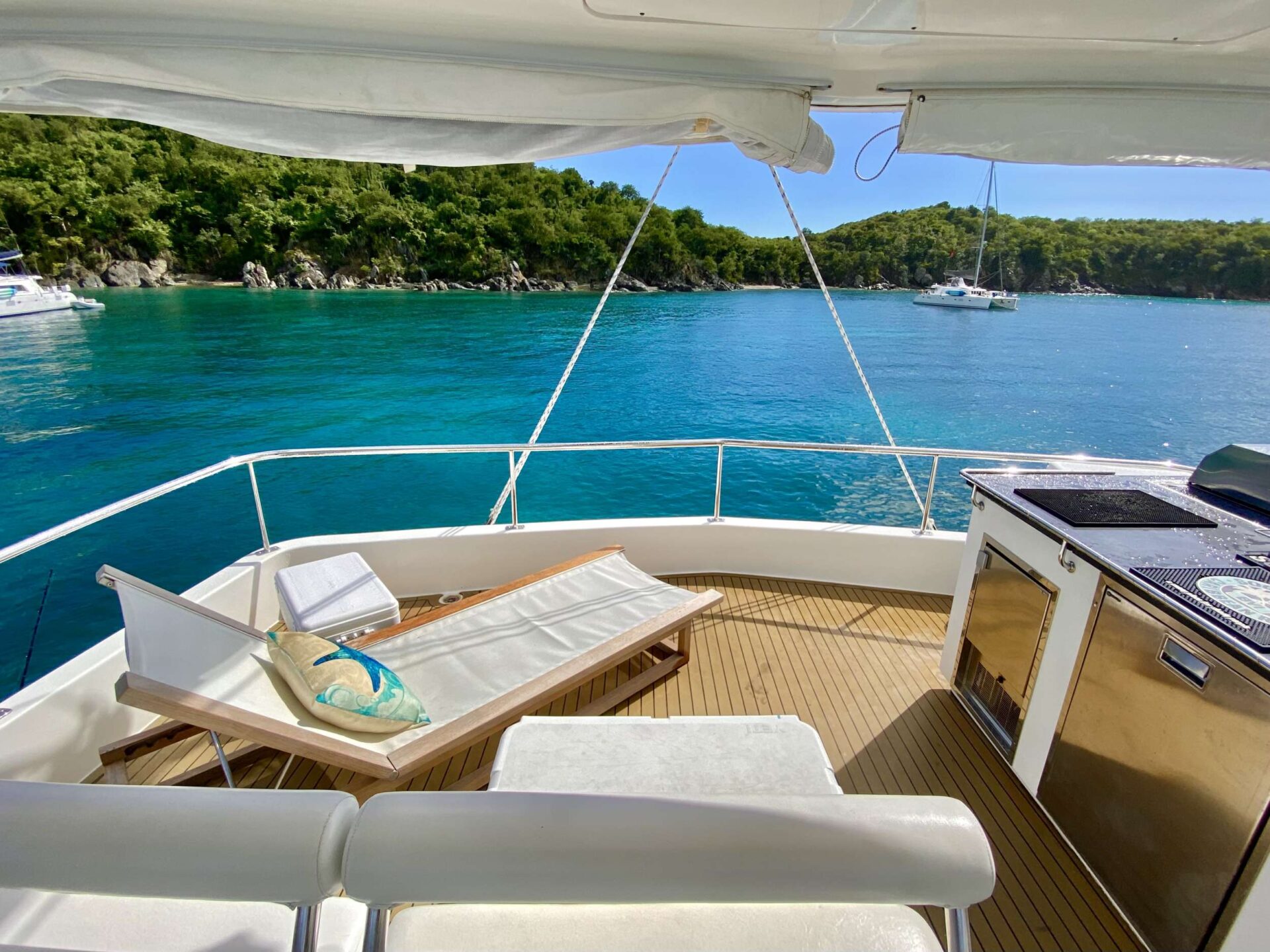 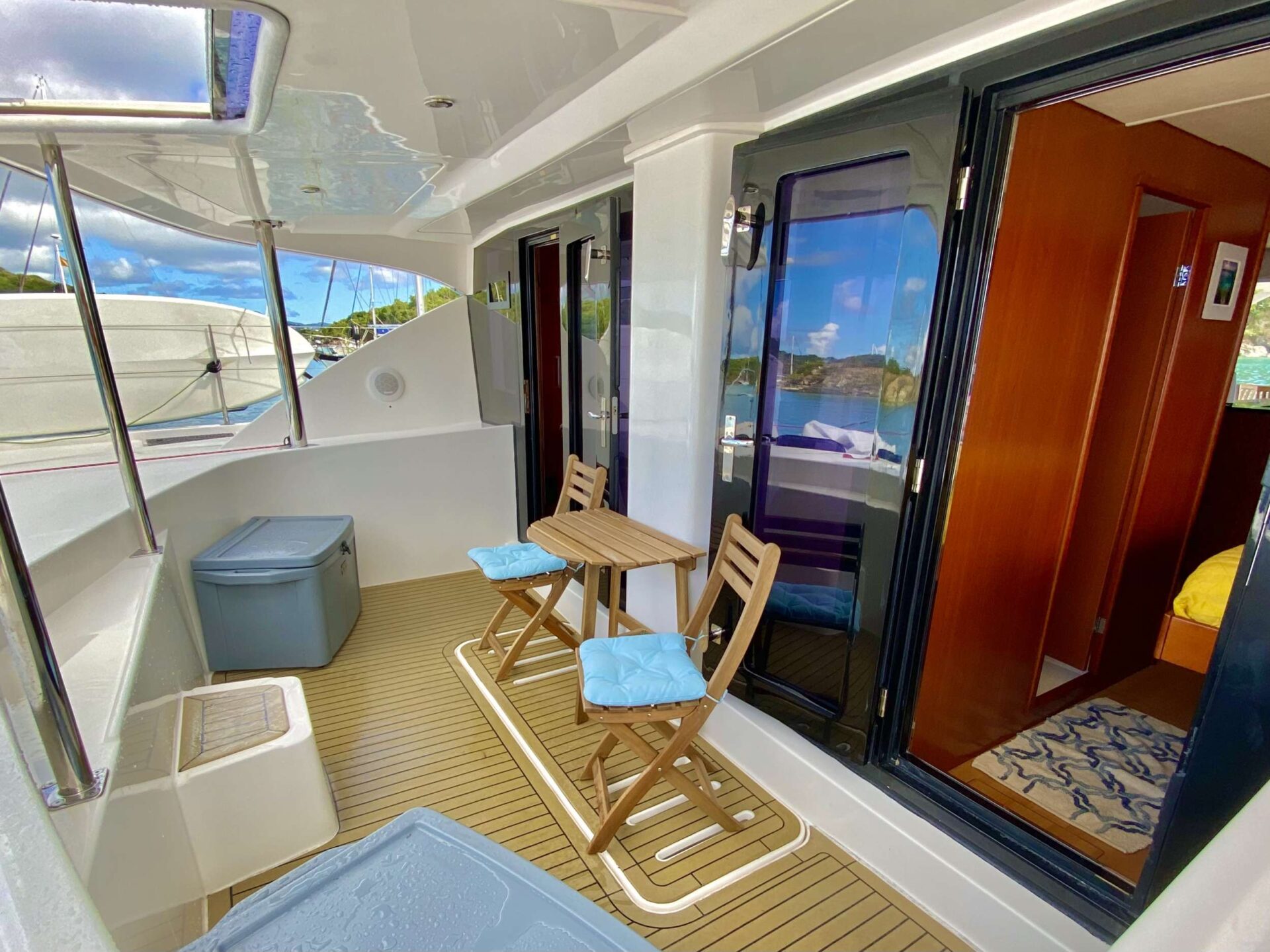 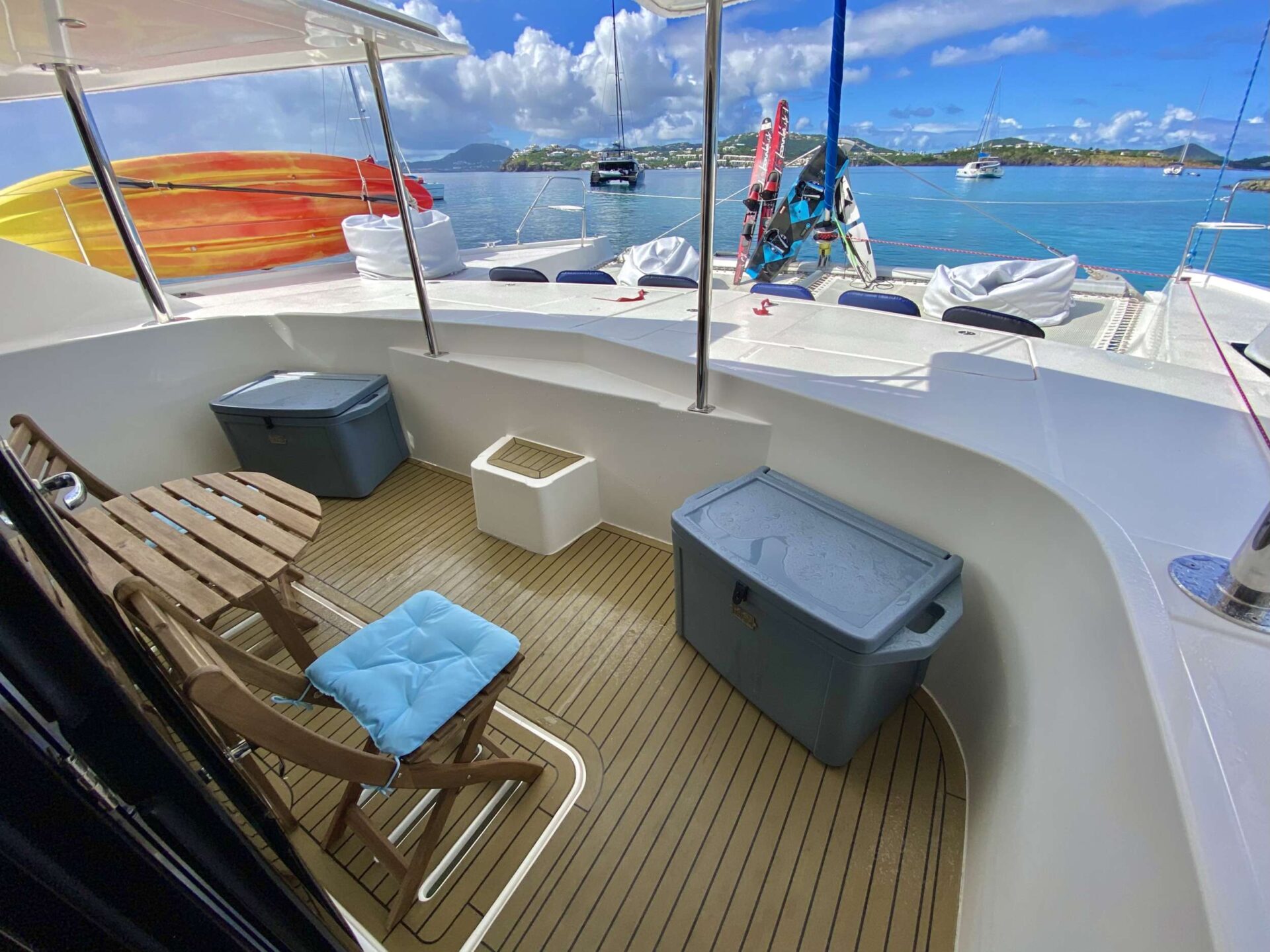 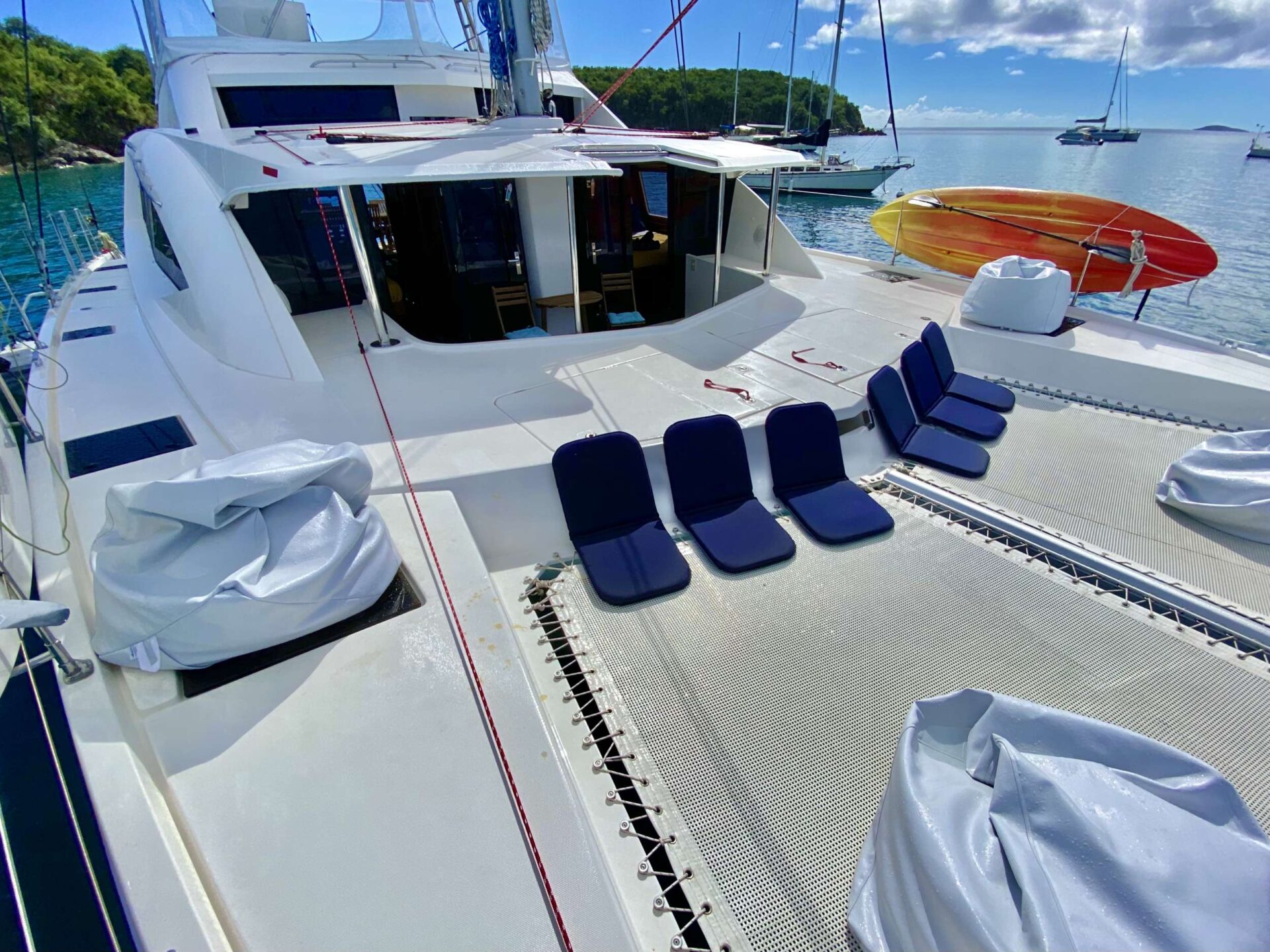 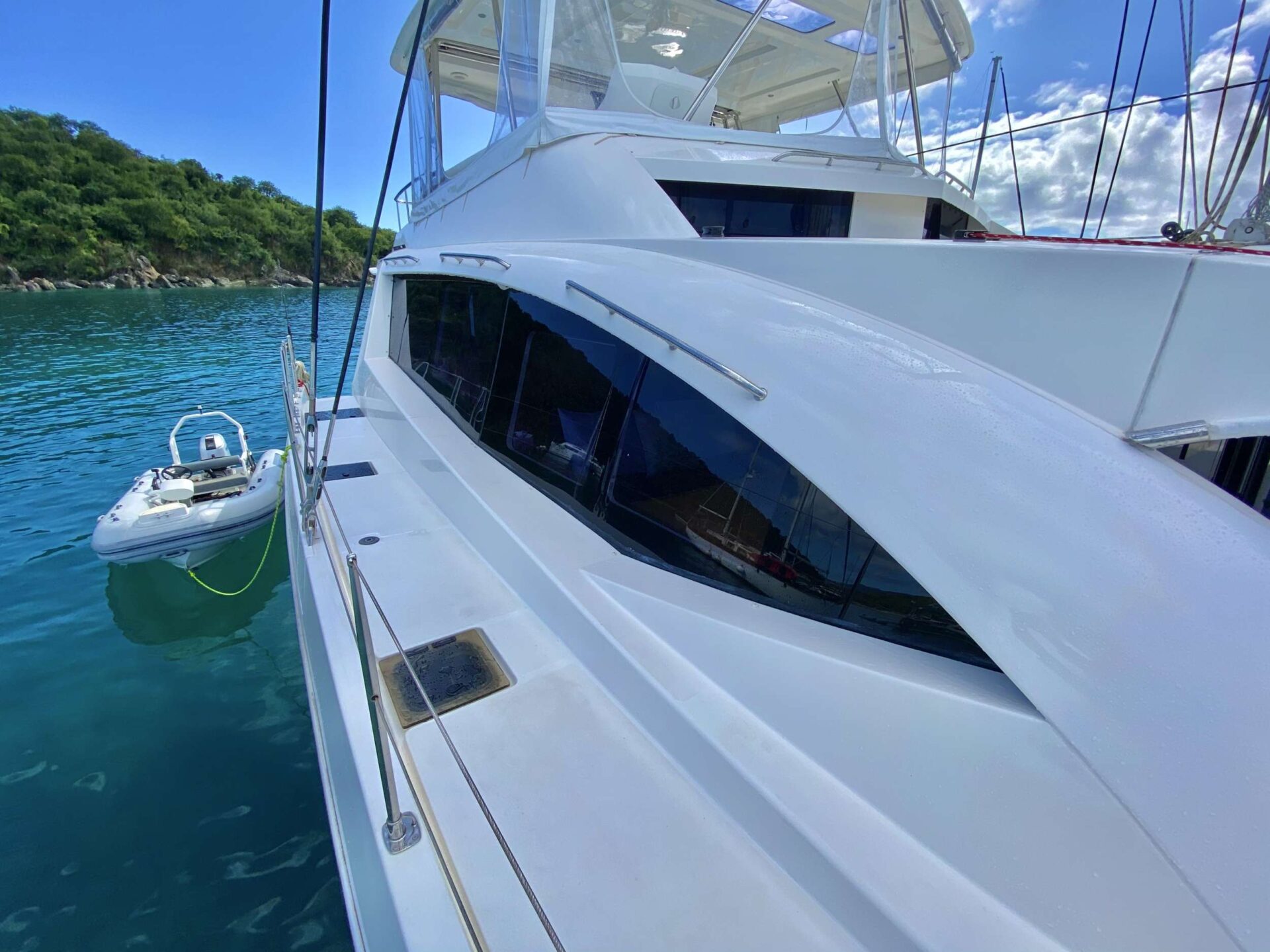 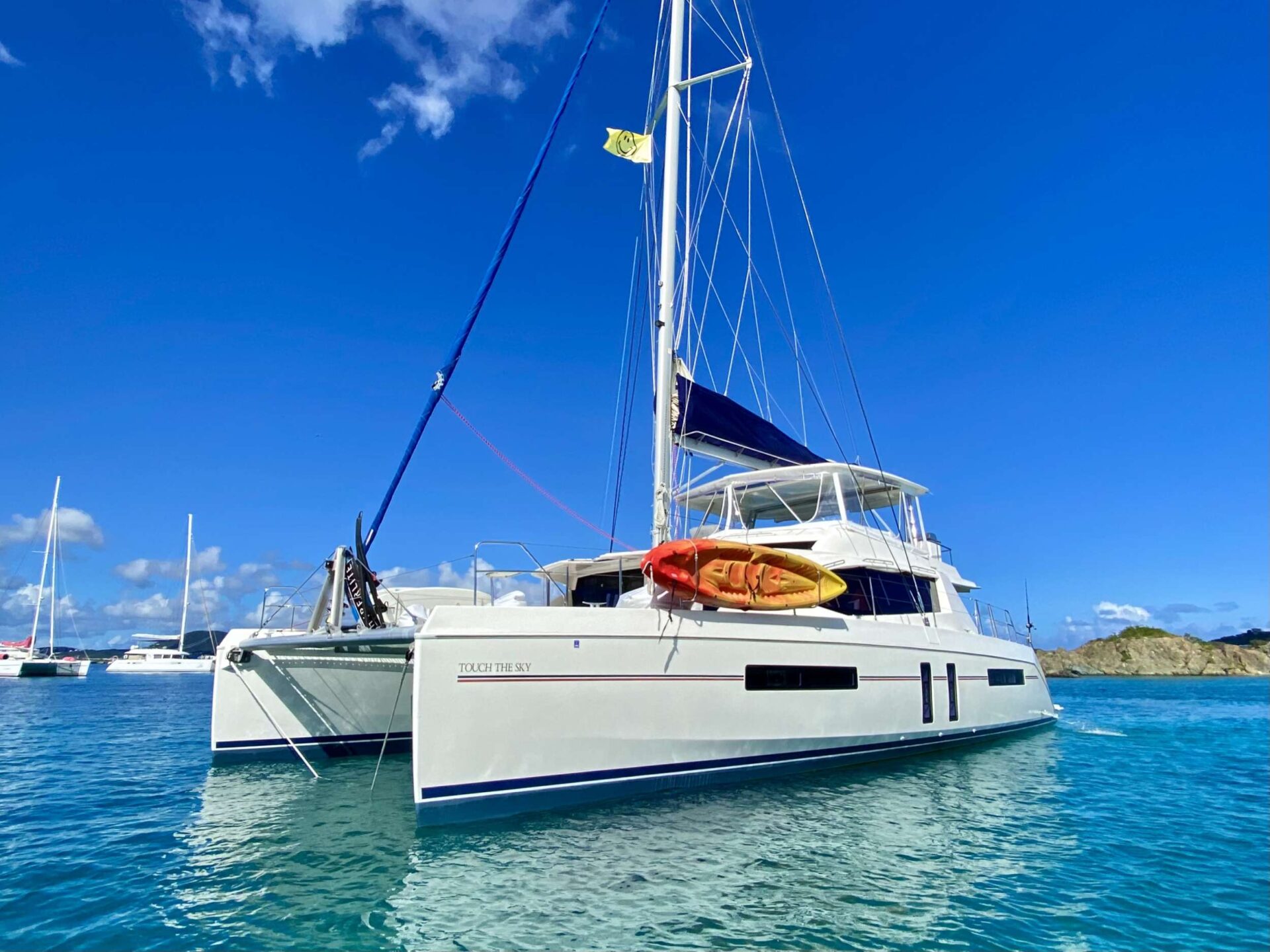 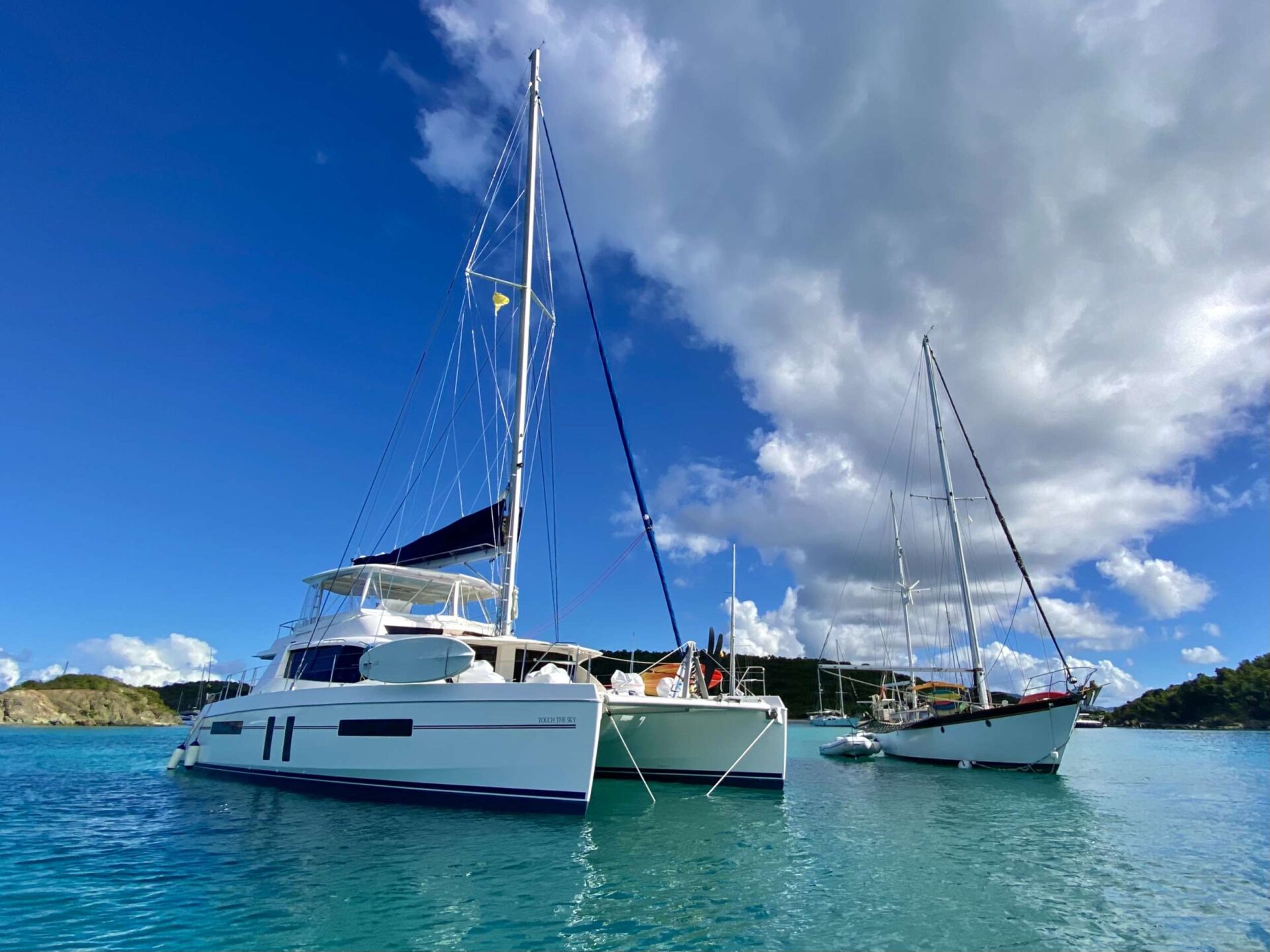 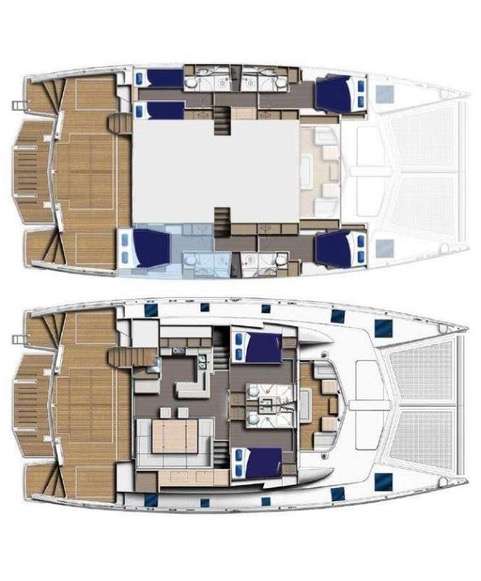 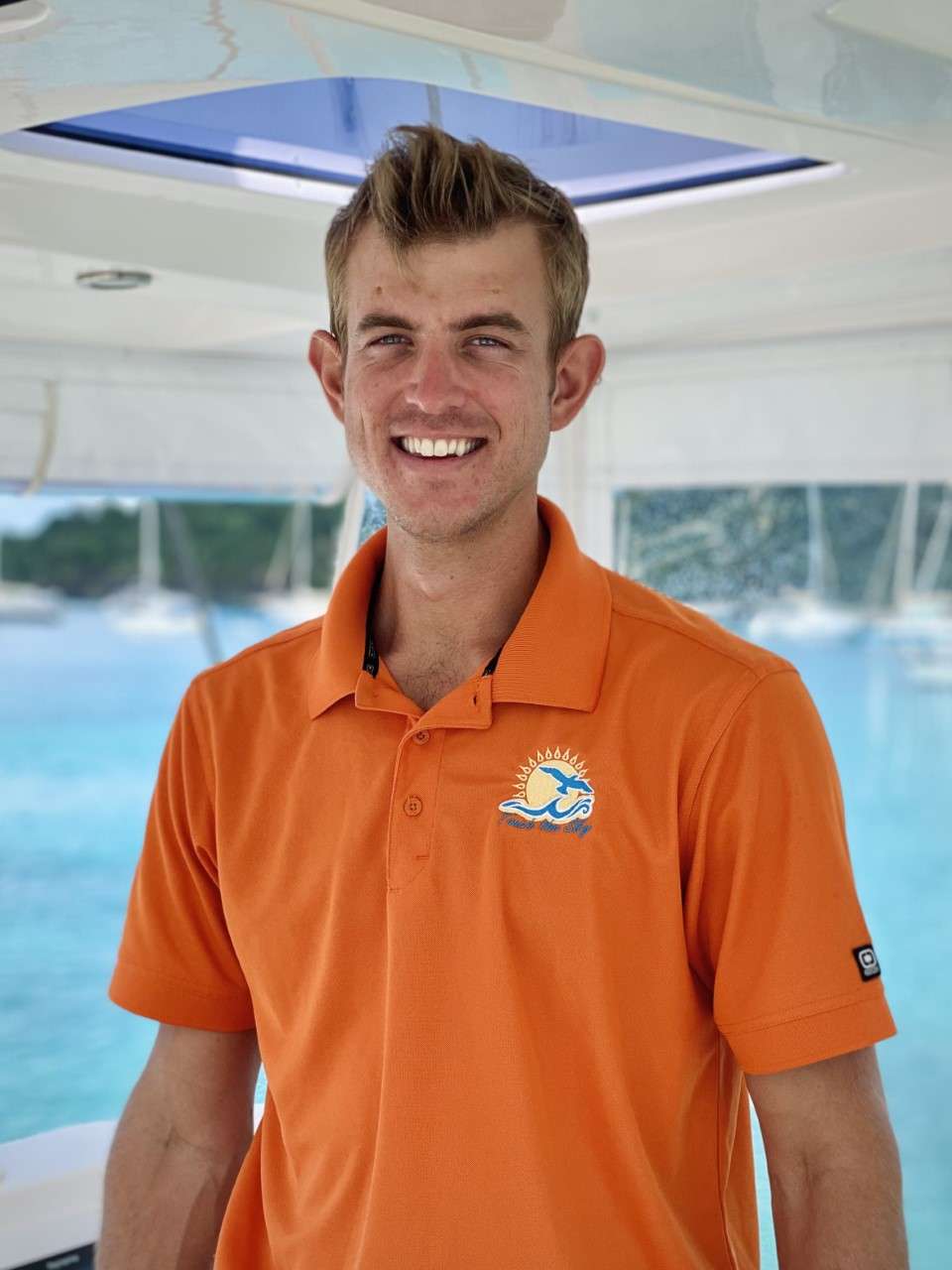 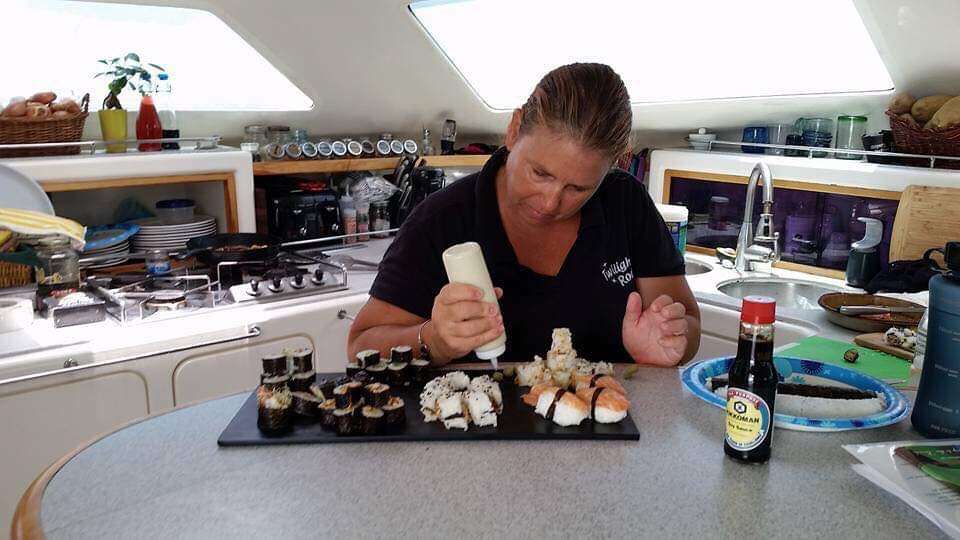 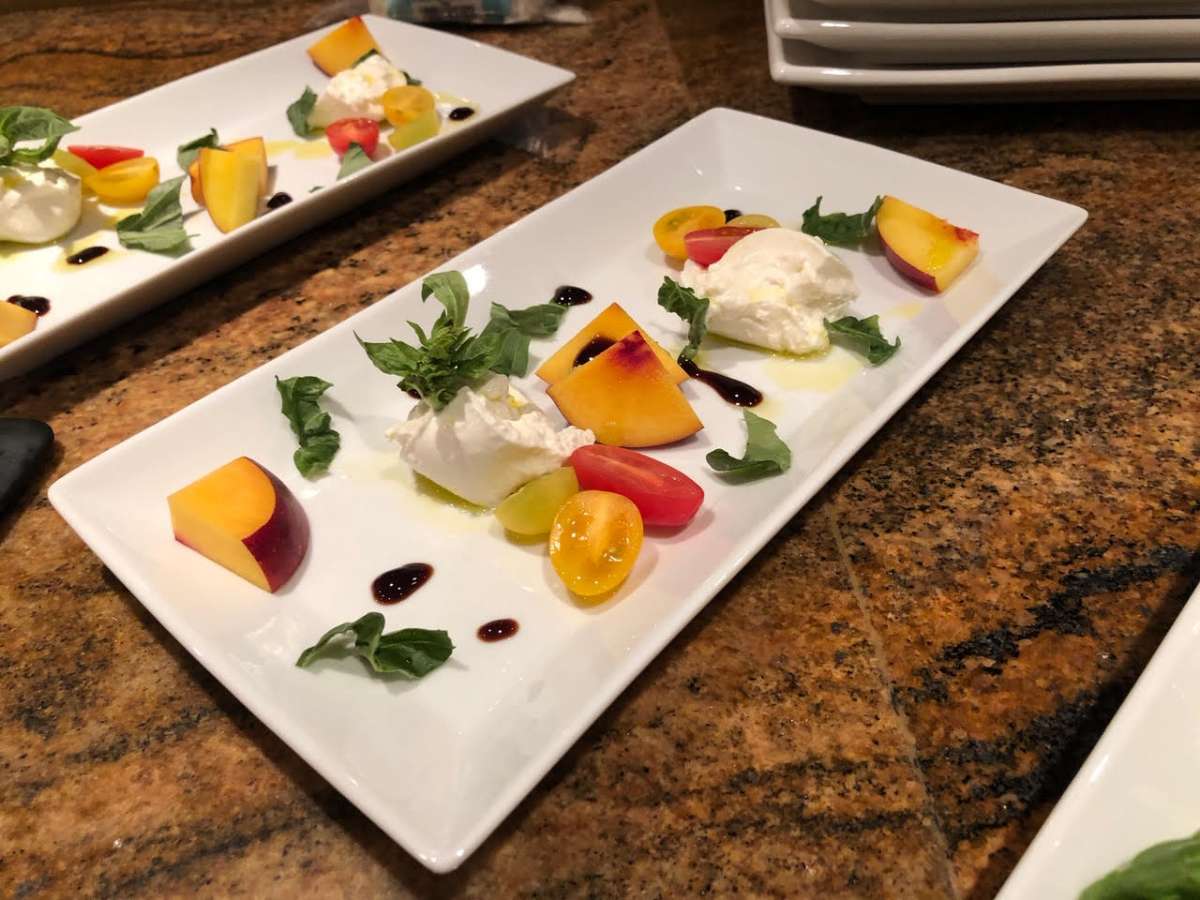 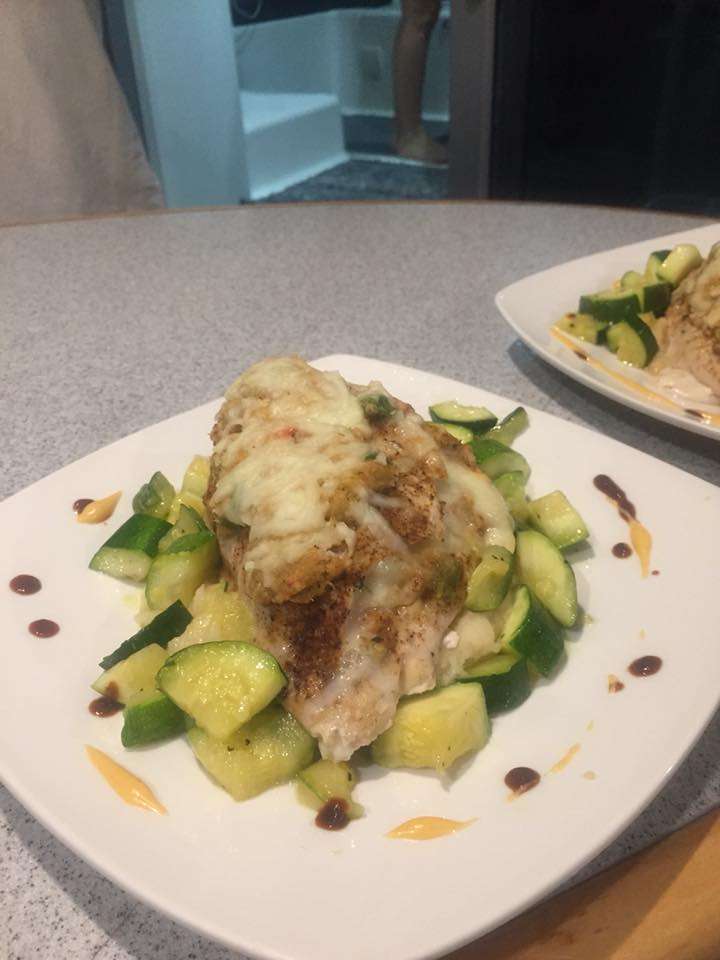 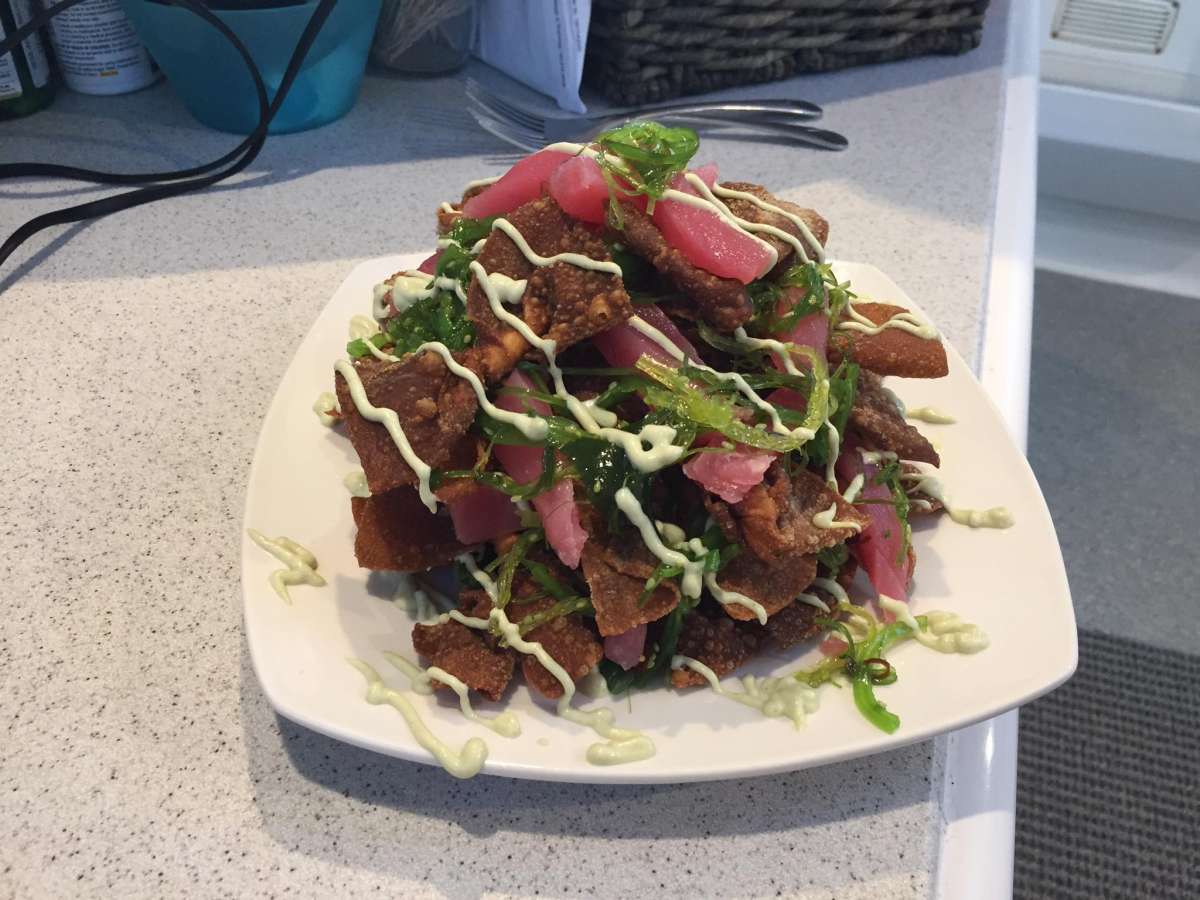 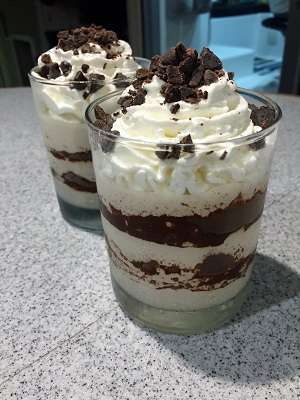 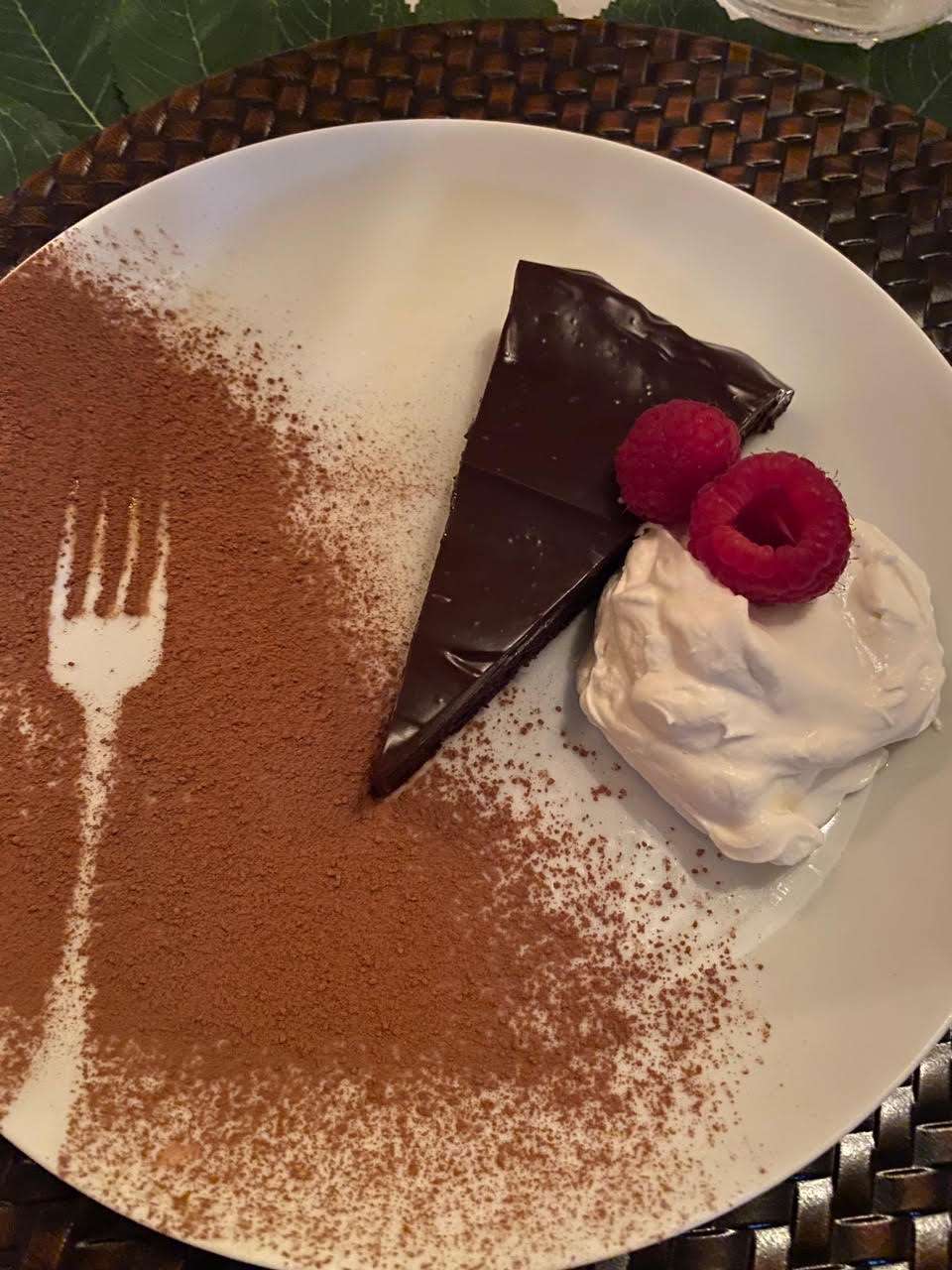 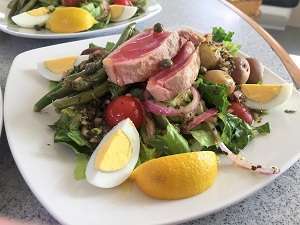 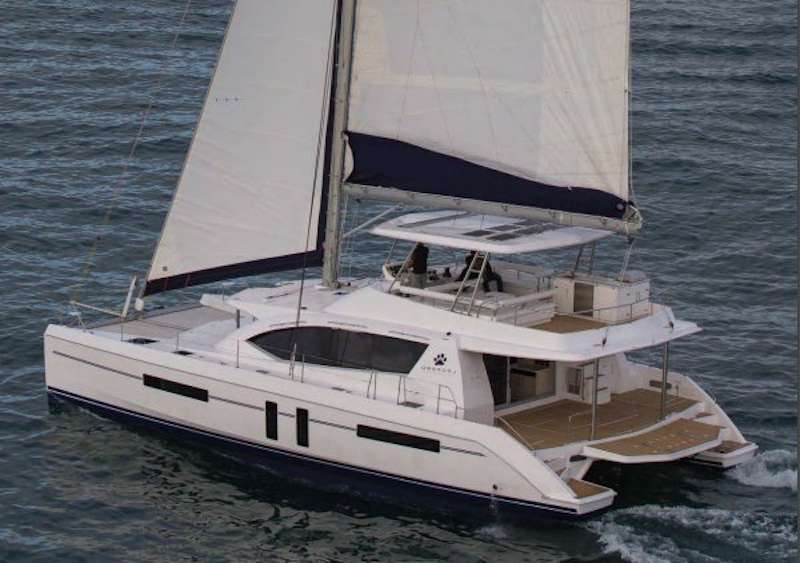 The fly bridge is easily my favorite place aboard TOUCH THE SKY, a Leopard 58, says Captain Ben Campion in an interview from home, when the US Virgin Islands border was closed and he couldn’t get to the charter yacht show.  “There’s lots of seating, and it’s all in the wind, and you’re not getting blasted by the sun, because it has a cover.  It’s a really nice place to hang out.  You can fully experience the Caribbean there and all the views.”

His friend Holly accompanied him.  Holly ran a charter yacht with Ben the previous year and was going to run TOUCH THE SKY with Ben this year, but something came up, and she has since been replaced with Jody Oles, who works very hard in the galley and perhaps has more sailing experience than Holly.  Says Holly, “Ever since I met Ben, he’s always been wild about the ocean.  Everything is water.  So the guests really love Ben.  Ben is such a fantastic water guy, and guests always come back from snorkeling saying, “I would never have seen that, had Ben not pointed it out to us.”  He knows where to find everything.

Asides from being friends for years before they started chartering, Ben says, “I have been on the water doing soft core charters since 2014 in the Mediterranean and Caribbean.  I did the Caribbean, going up and down the Greater and Lesser Antilles last year, going island to island.  I have first hand experience on yachts in the Caribbean.

“In 2014 when I first got introduced to boating, my uncle had bought a yacht.  It was the one we worked on last year, the 45′ Fountain Pajot.  He bought her in the Mediterranean, looking for somebody to crew it.  He reached out to a bunch of friends and family, and I was the only one who took the opportunity.  That’s where I got the sailing bug. Ever since then I would come back as often as I could.  After my fourth season on the boat, I got a full time job as a first mate on an 80′ yacht, and that’s where I said this is what I’m going to do for my career.

We’ve do pretty well with anyone we have on the boat, but if I had to choose which type of charter party fits me best, I would have to say I like families. I like seeing the parents and kids interact.  I enjoy creating memories they will share together forever.  The kids are usually so blown away by the snorkeling and sailing, the color of the water – everybody loves that – but kids express it.  I’m not super fond of the party animals all the time; we prefer families and laid back couples.

The yacht gets its name from a song called Touch the Sky. It’s about wandering to the unknown.  Last year when we had the 47′ boat; it was a great boat, it was awesome for six guests, but even with a fully loaded boat, it was cramped for six with all the storage.  So this year we’re really excited to have a larger boat.  It’s more comfortable for guests; there’s a little more wiggle room.

If I had to choose a charter memory, it would be when we had the French guests onboard.  They all flew from France, and before they arrived, they had been asking us what challenge we would have for them.  So what we came up with was anchoring the boat just off a beach and set up this obstacle course where they had to divide into groups of three and transport this fender to the beach, come back with the fender, go back with it after putting a life vest on it, and the last person to reach shore had to swim down with the fender, catch a mask and slap it on the fender, bringing it back to the boat by kayak.  It was hilarious and funny.

If I came back as an animal, I would have to go with being a bottlenose dolphin.  They have the brain capacity to fully enjoy living underwater; they jump, they swim, and they’re great to snorkel with, while speaking to us.”  Ben did his best to imitate the sound.

SLEEP ABOARD: 1/2 the daily rate. Dinner ashore at client expense. Includes boarding after 4pm, welcome cocktail and breakfast the next morning and early start. Special offers do not apply to this rate, calculate prior to any discount please.

Information believed correct, but Nicholsons cannot be responsible for content.