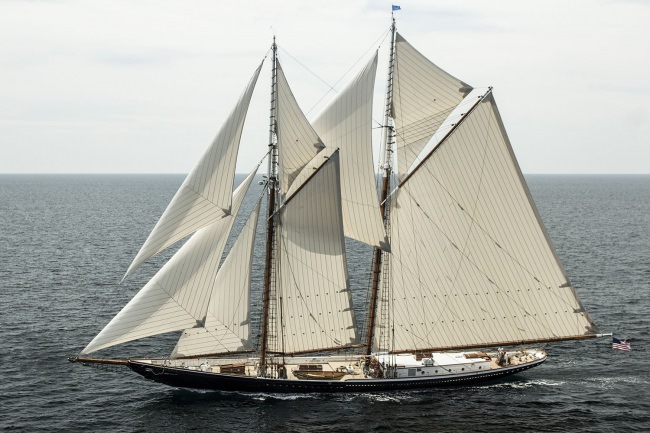 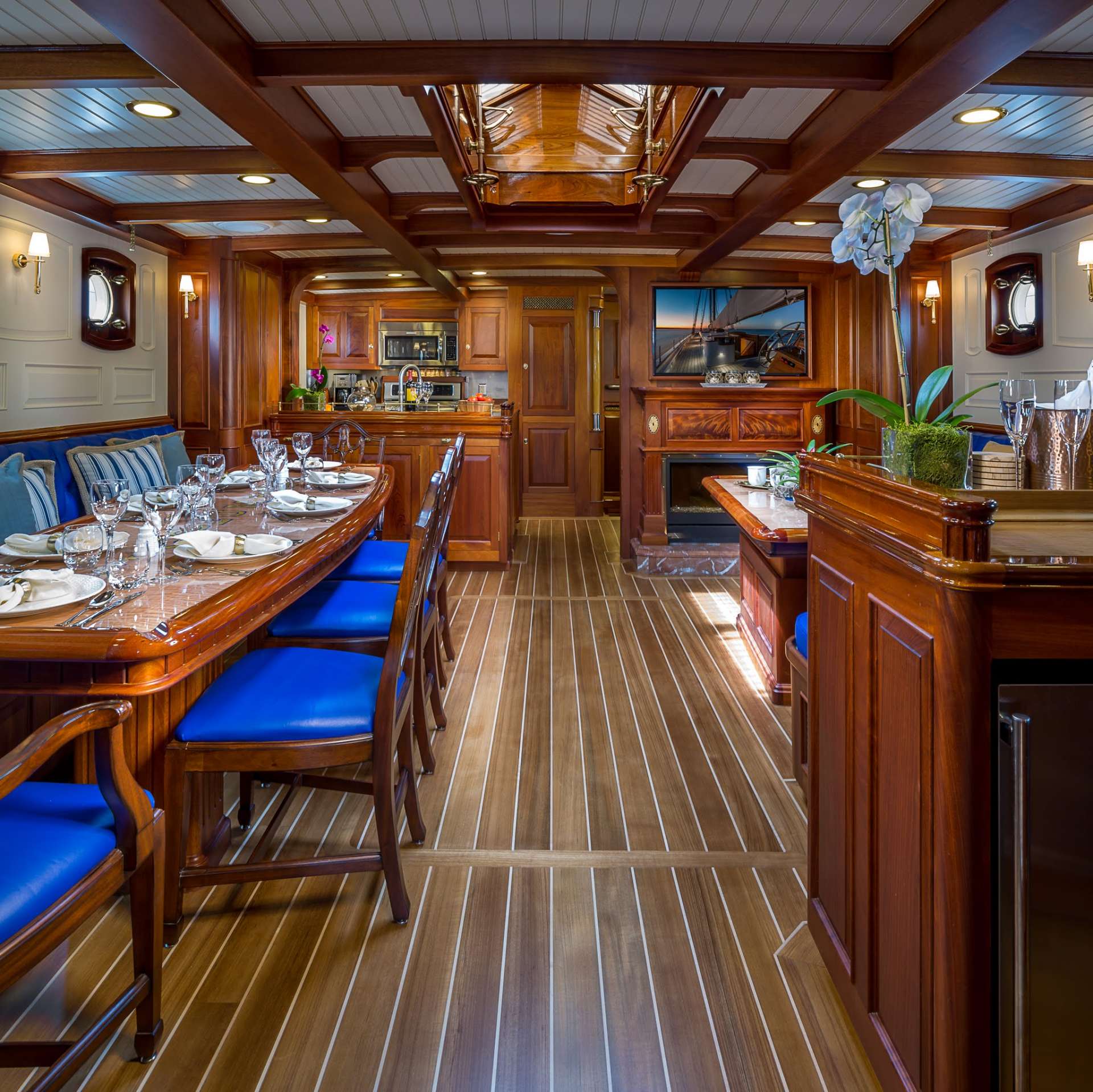 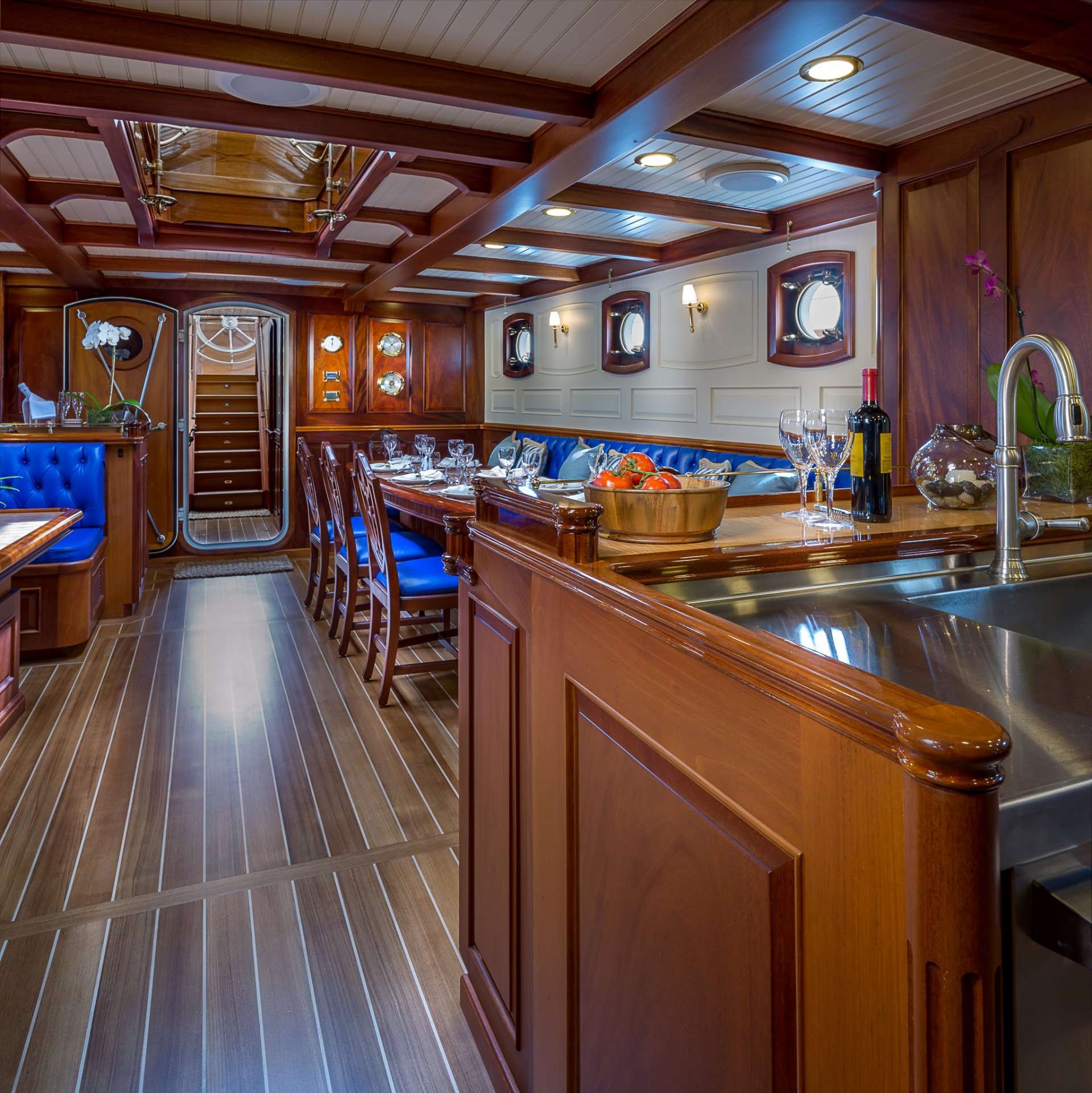 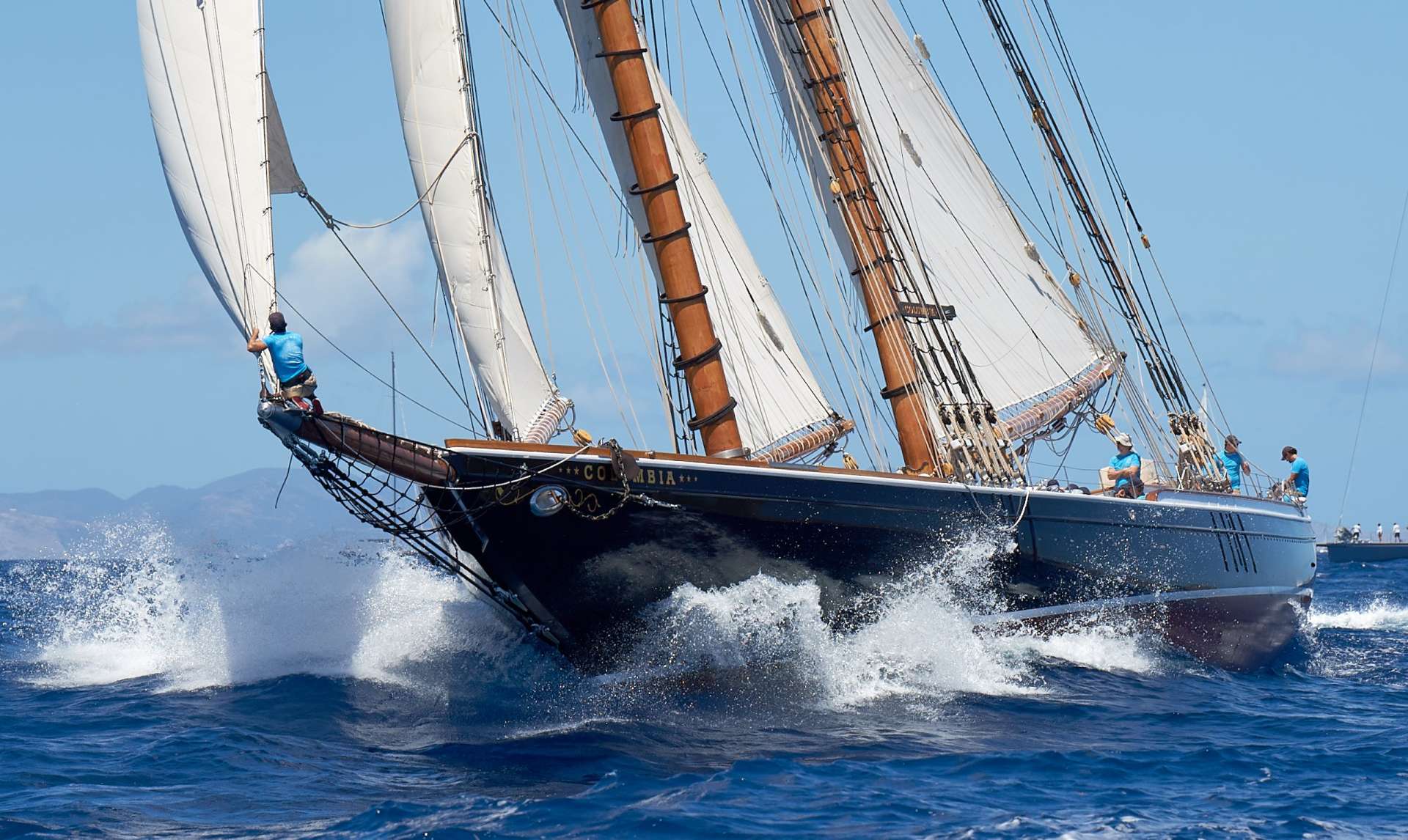 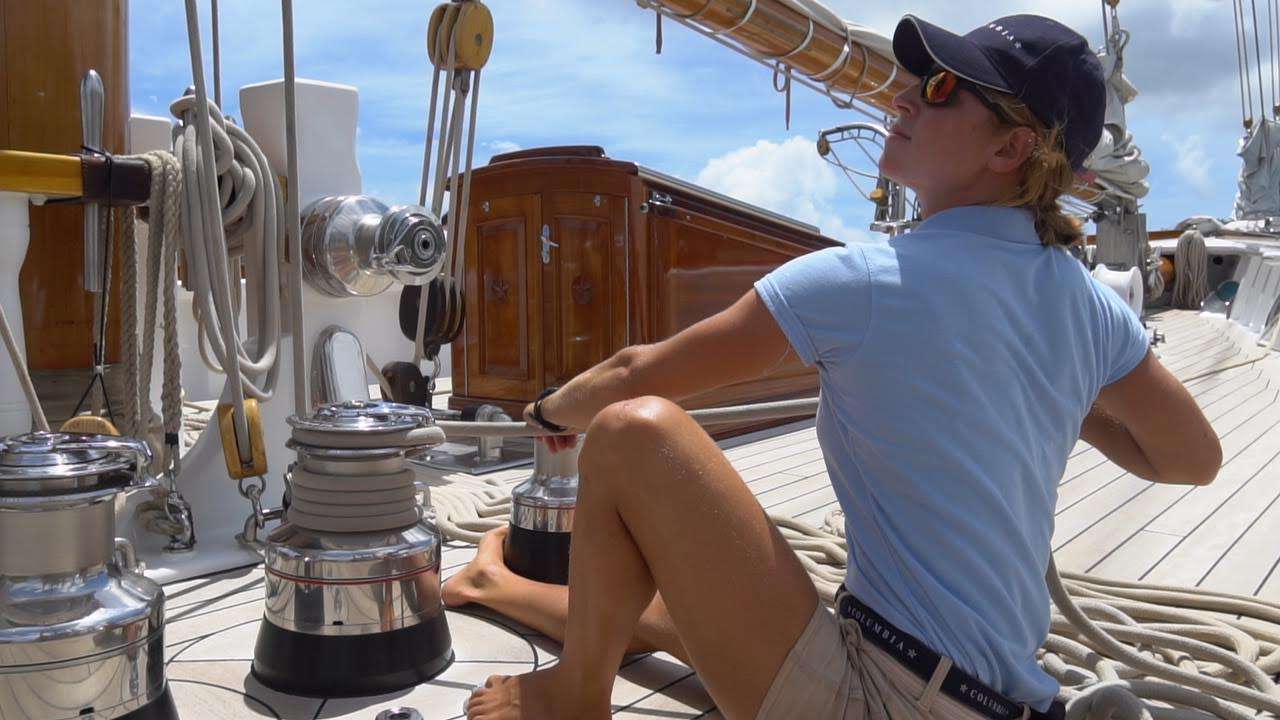 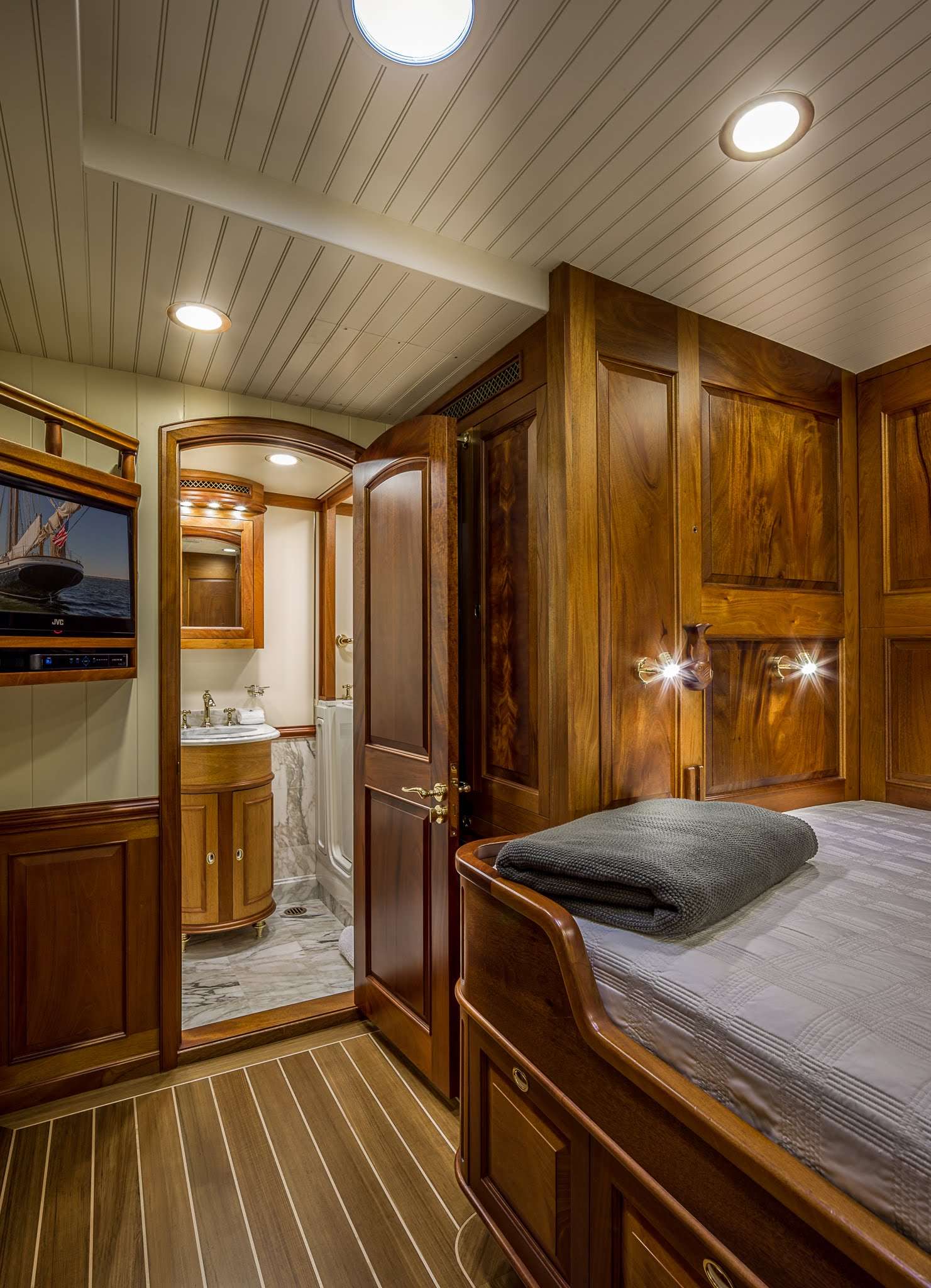 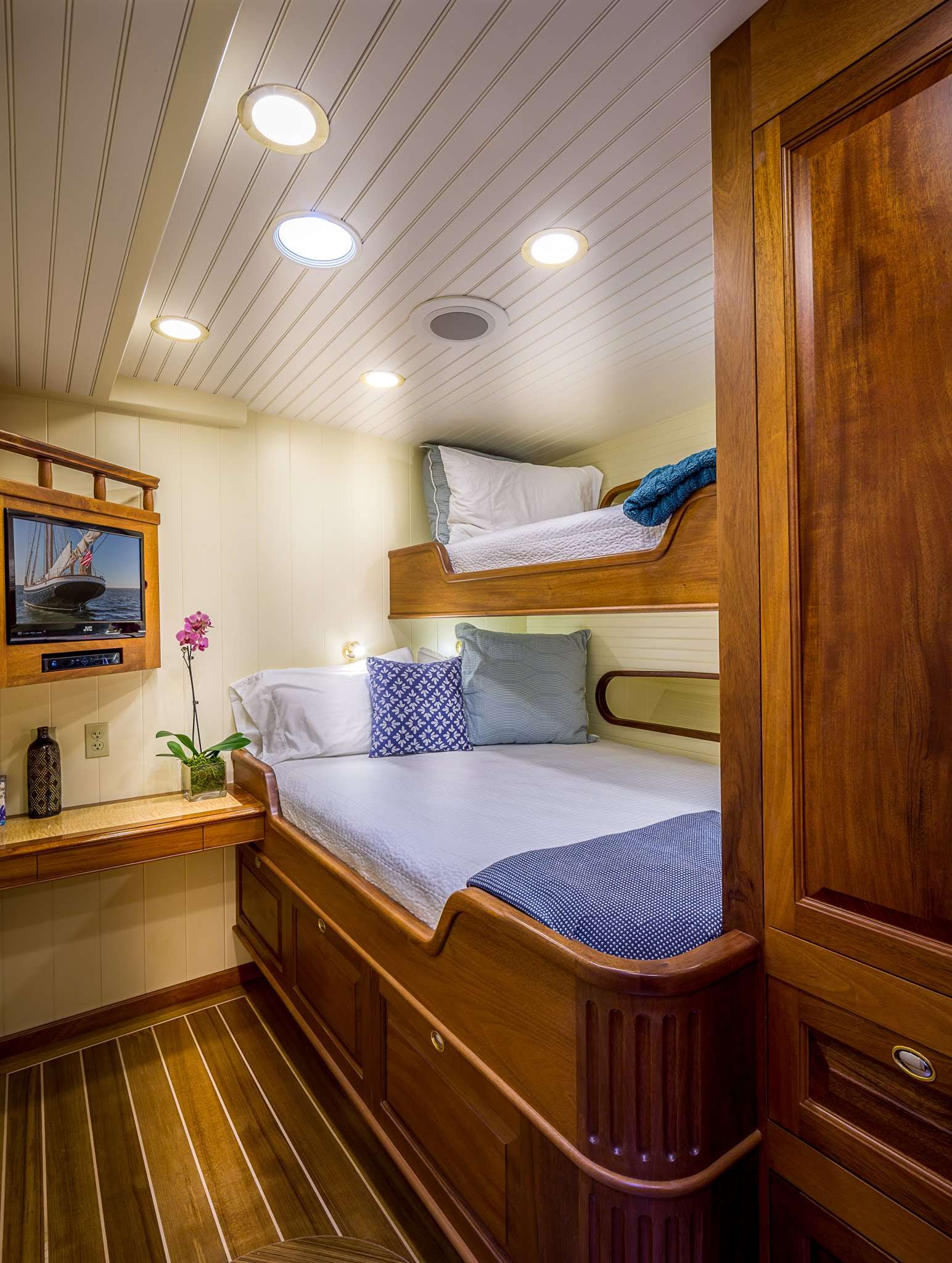 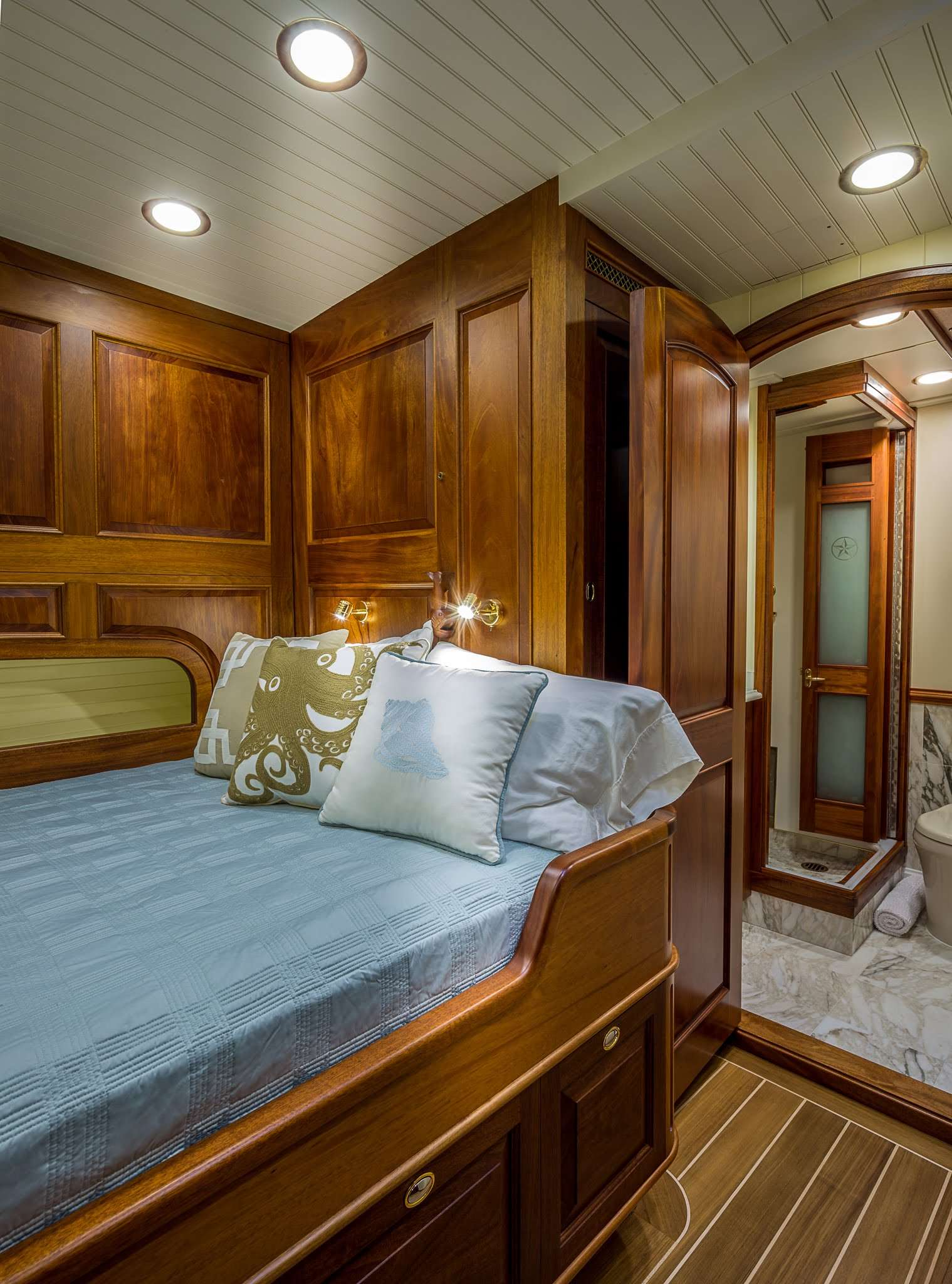 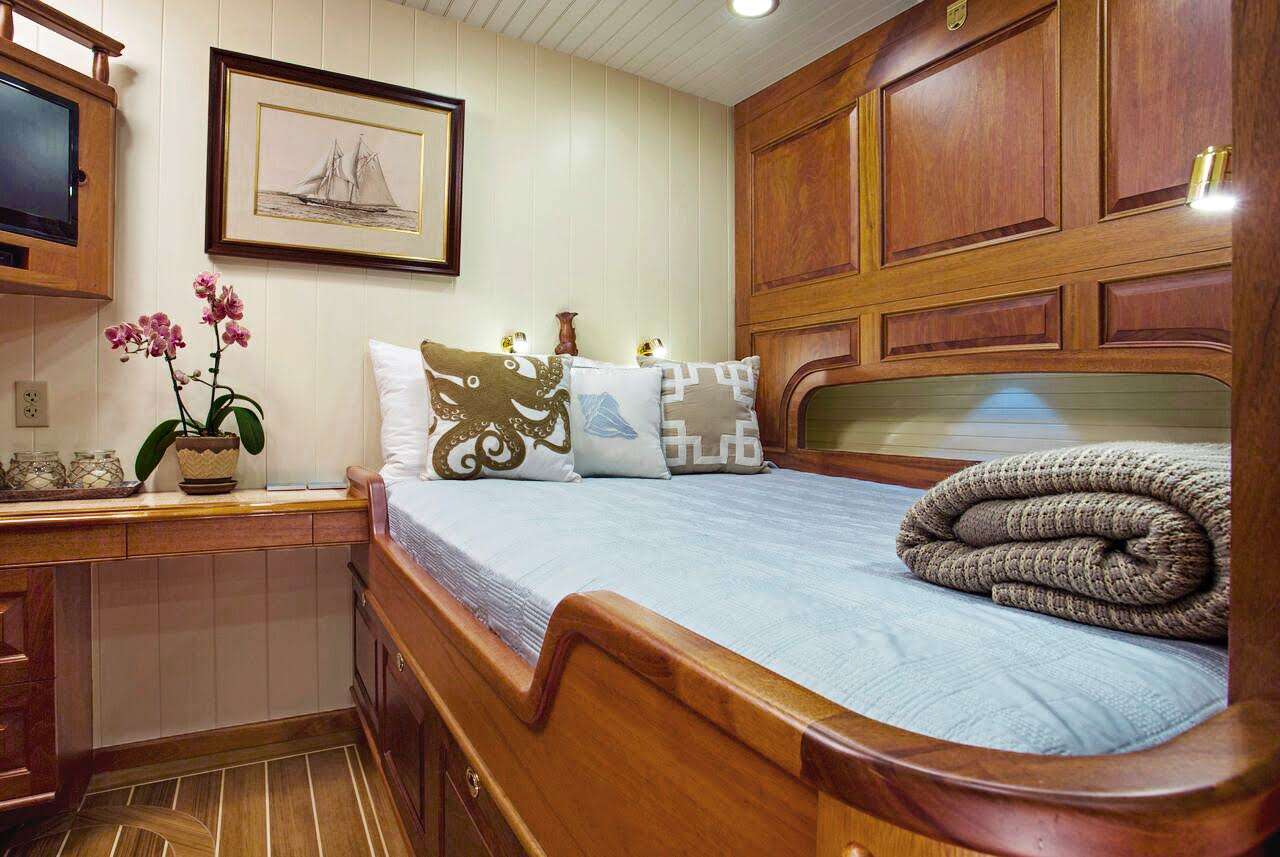 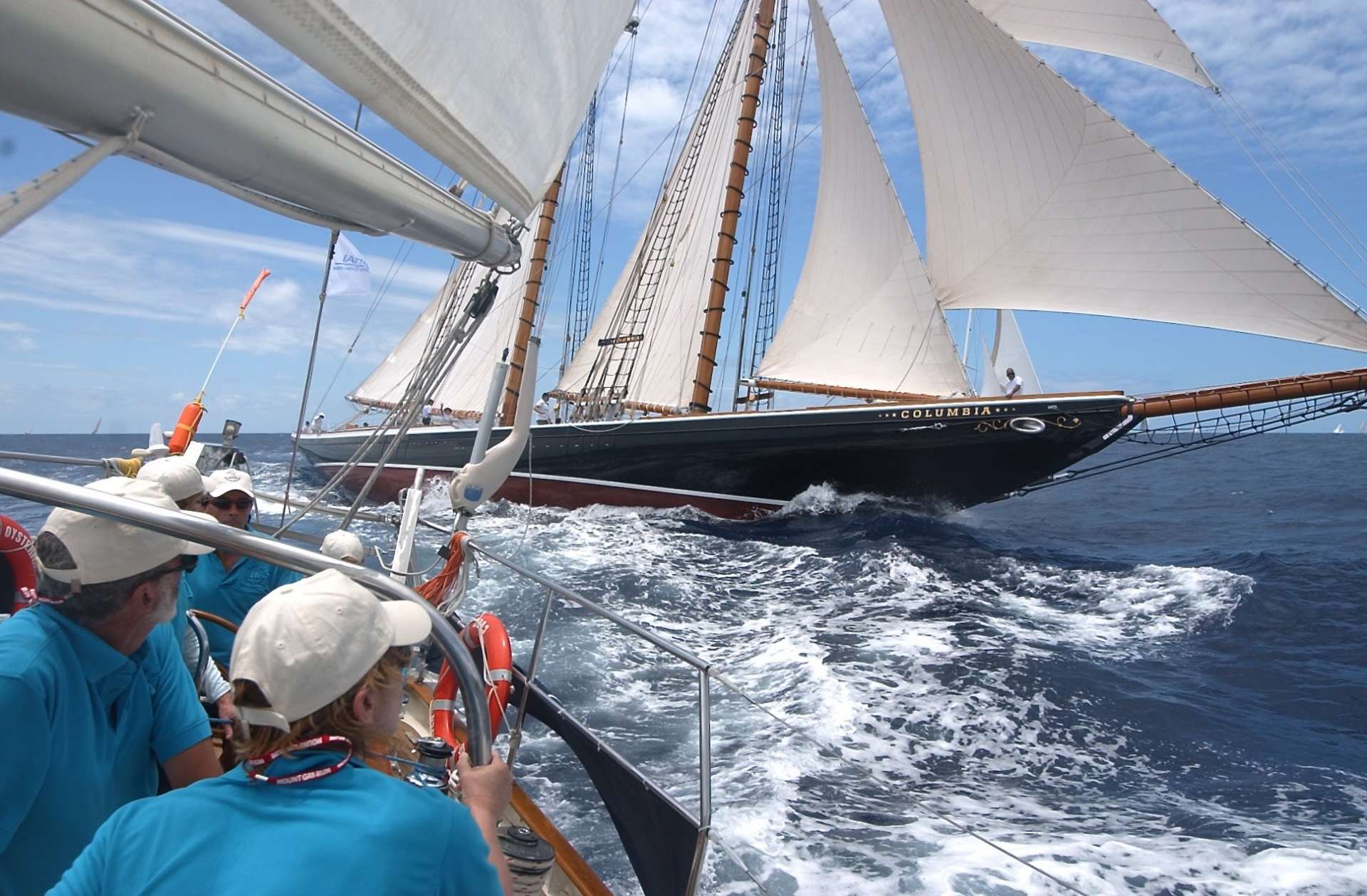 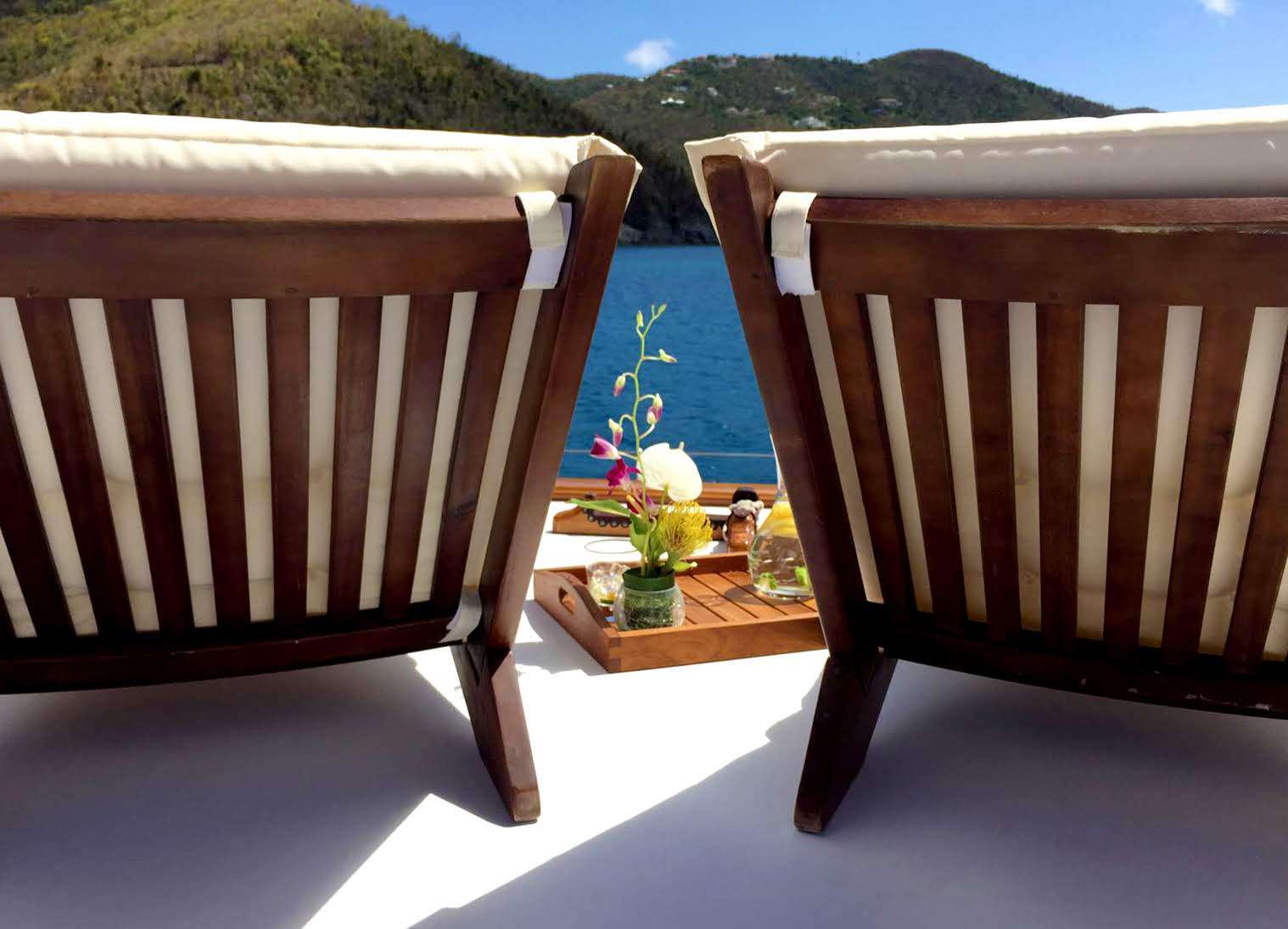 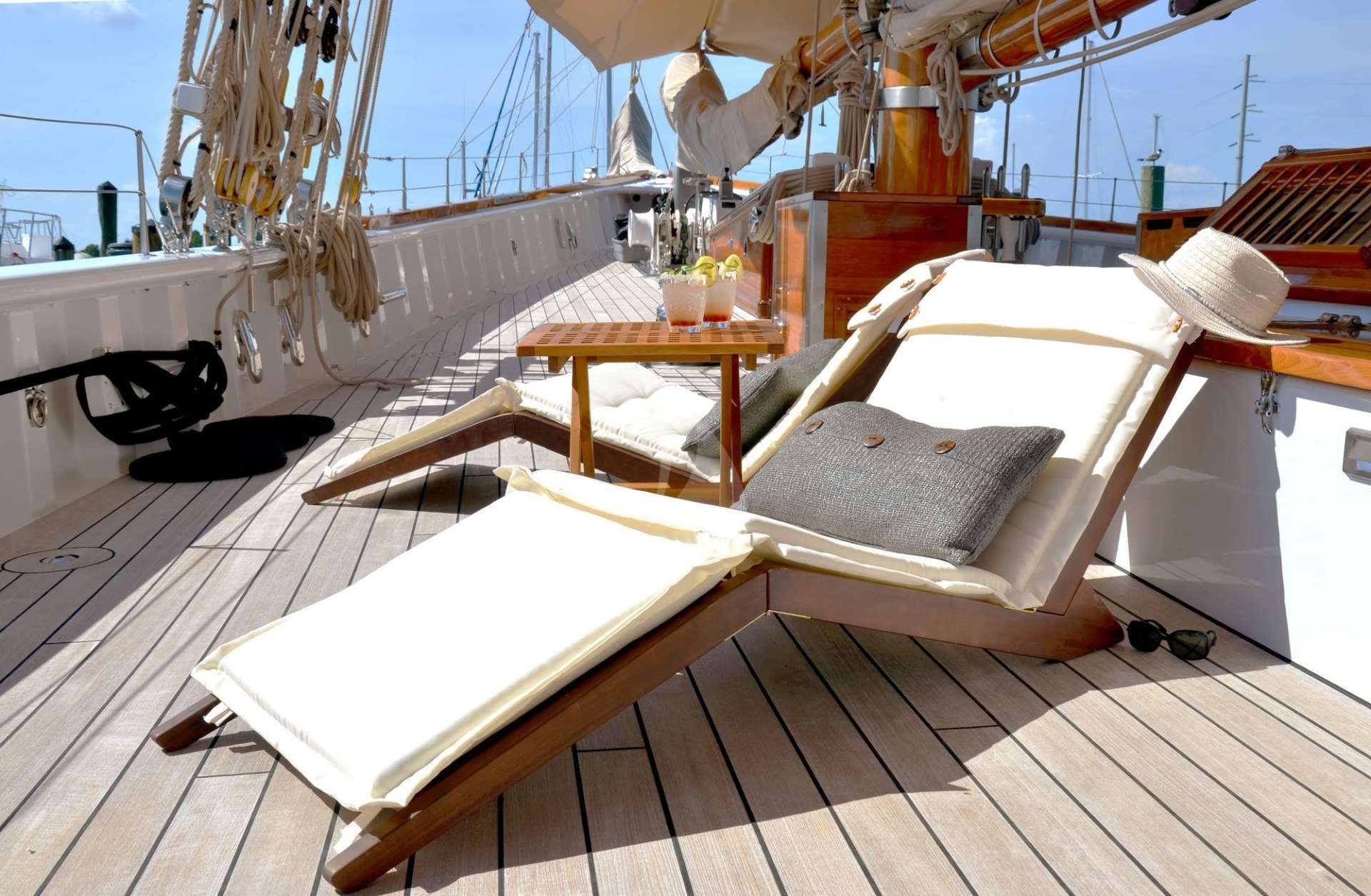 COLUMBIA – The 141’ custom schooner, COLUMBIA, was built in 2014 after an exact replica of the 1923 racing schooner Columbia from Gloucester, Massachusetts.  This is her first full Caribbean season for charter, and she’s going down island. In 1923 schooner Blue Nose, owned by the Canadians, was winning all the yacht races…..  Columbia was the American’s answer back…. Named after the goddess of freedom, Columbia is a symbol for the female embodiment of America: win for your country.  The owner of present-day Columbia found the naval architect plans of the original Columbia and had the yacht built in 2014.  With 25’ beam and 16’ draft, given some wind, she can easily reach speeds of 12-14 knots….

Our friend Cosi is the second mate aboard.  At 19 she entered the classic boat world with schooner Adventuress of Seattle, Washington. When she moved to Martha’s Vineyard, Cosi got a taste of yachting and offshore sailing with the all-girls team on Saphedra before undertaking her first Transats on the J Class Lionheart and schooner Elena of London.  Together with first mate, Dylan Ferry, she is in charge of COLUMBIA’s enormous foredeck.  Cosi is also an accomplished singer/songwriter.  She plays the guitar beautifully.

Dining is on the table forward, or guests dine below.  There’s a large Dory sailing dinghy stowed there that doubles as a classic rowing dinghy, right out of the movie Captain’s Courageous.  The tender to Columbia is a Williams Jet Boat, and kneeboarding and tubing are offered.

The open deck offers plenty of room for 12 people.  The yacht has four guest cabins, but all of them have a Queen bed plus an upper single.  So twelve guests can be accommodated.

You enter below through the pilot house astern onto a long corridor, off of which are all the guest cabins, plus a day head and stewardess cabin, before entering the yacht’s full beam main saloon, which has blue naugahyde tufted upholstery on settees surrounding a long table to port.  It has the words ‘Schooner Columbia’ monogrammed onto it.  A lounge is to starboard with fireplace, bar aft, and butterfly hatches overhead.   The galley and Chef Isaac are forward, along with crew quarters for nine crew. Fully air conditioned, the yacht has all the modern amenities and freezers of modern day living.  There is tons of storage; she is a very sea-worthy vessel.

Featuring beautiful woodwork of inlaid wood, the master stateroom offers a Queen size bed along the side of the cabin and Pullman with TV.  The VIP Queen is opposite the master with fold up Pullman.  Both have large marble bathrooms.  Doors pull across the hallway to create a watertight bulkhead before reaching the third cabin with lower Queen berth and Pullman.  All the staterooms have down blankets and thick mattresses – bamboo hypoallergenic mattresses.  The fourth stateroom is a mirror image.

10 Crew – The yacht runs with many, many crew, but the crew quarters are comfortable, and Captain Seth Salzmann likes to sail the boat as much as possible.  From Key West, he owns the When and If, and his wife Jenny is aboard as chief stewardess.

Rates and Availability – COLUMBIA charters for $60,000 weekly + expenses, while available in the Eastern Caribbean during winter and New England during summer.  Offered for racing charters, such as the Bermuda race, Antigua Sailing Week, Antigua Classic Yacht Regatta and the like, she’ll likely charge a premium, as well as for Christmas and New Year.