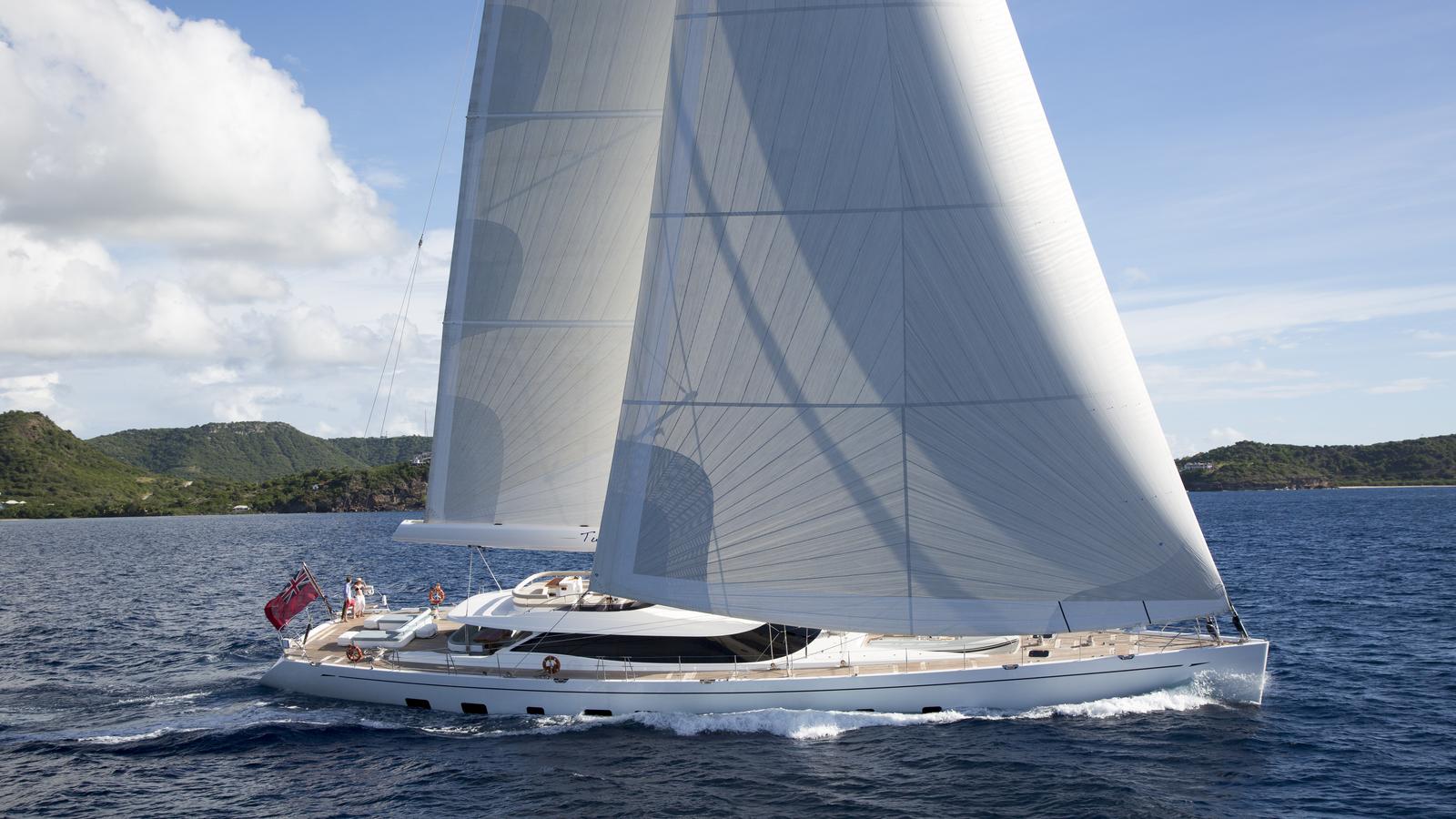 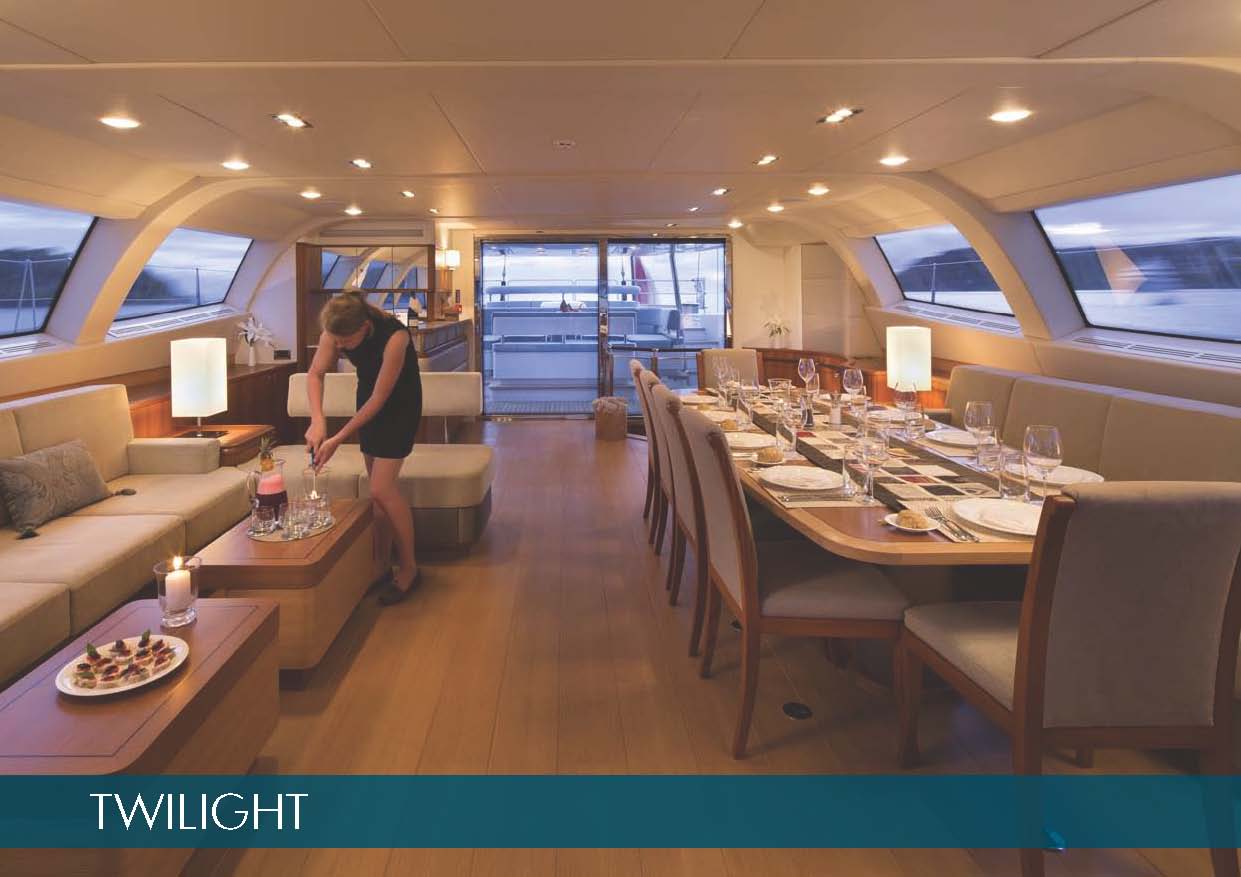 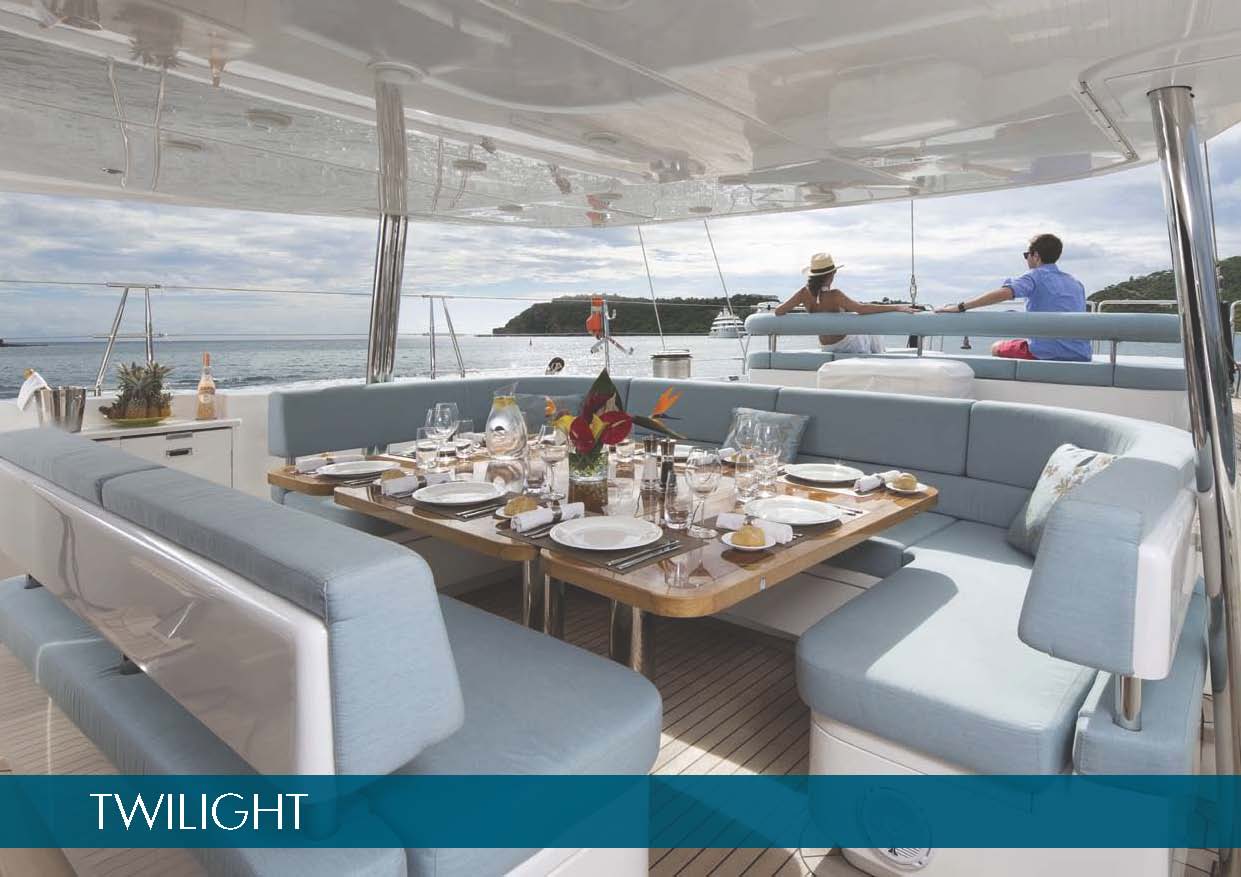 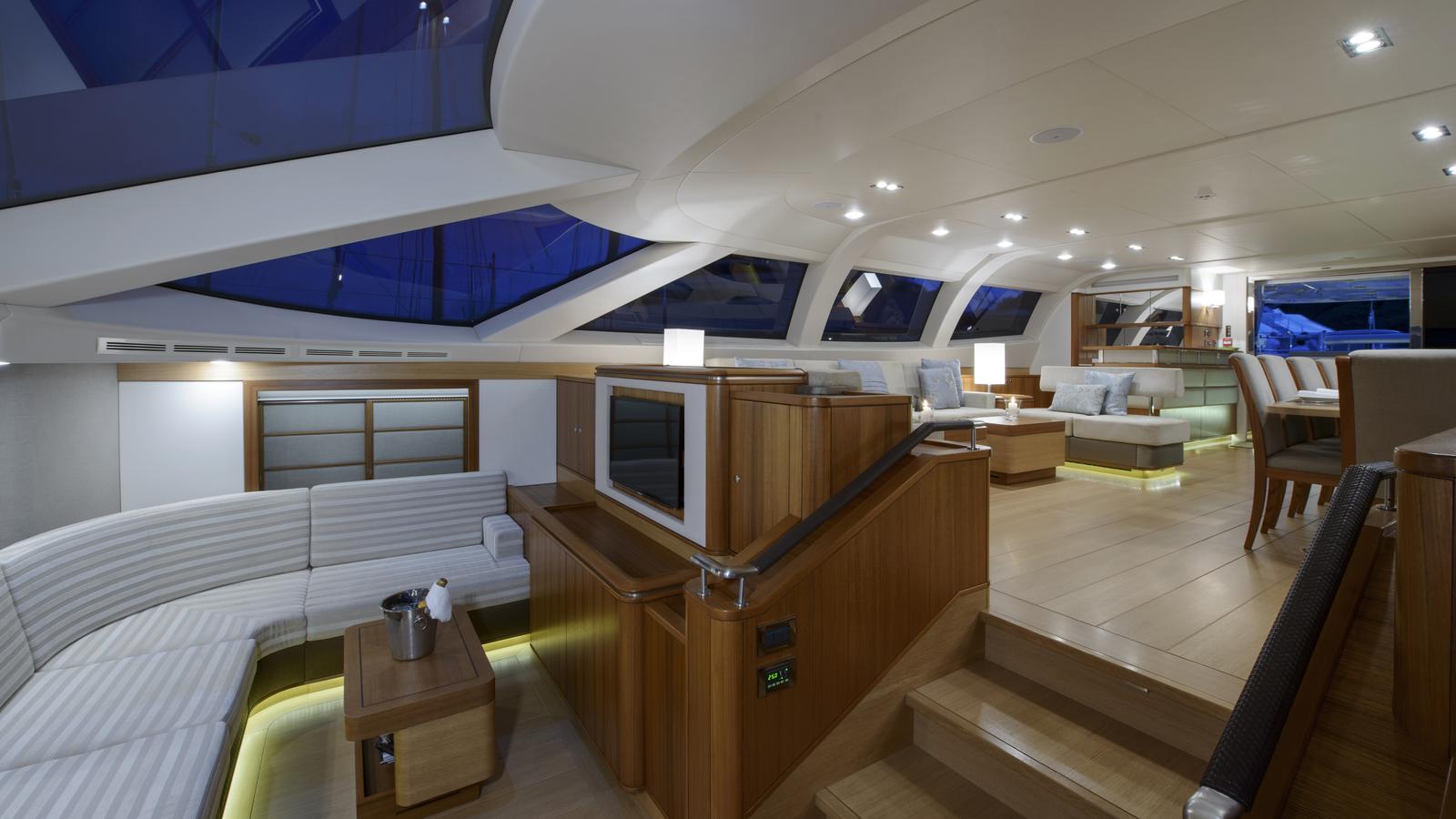 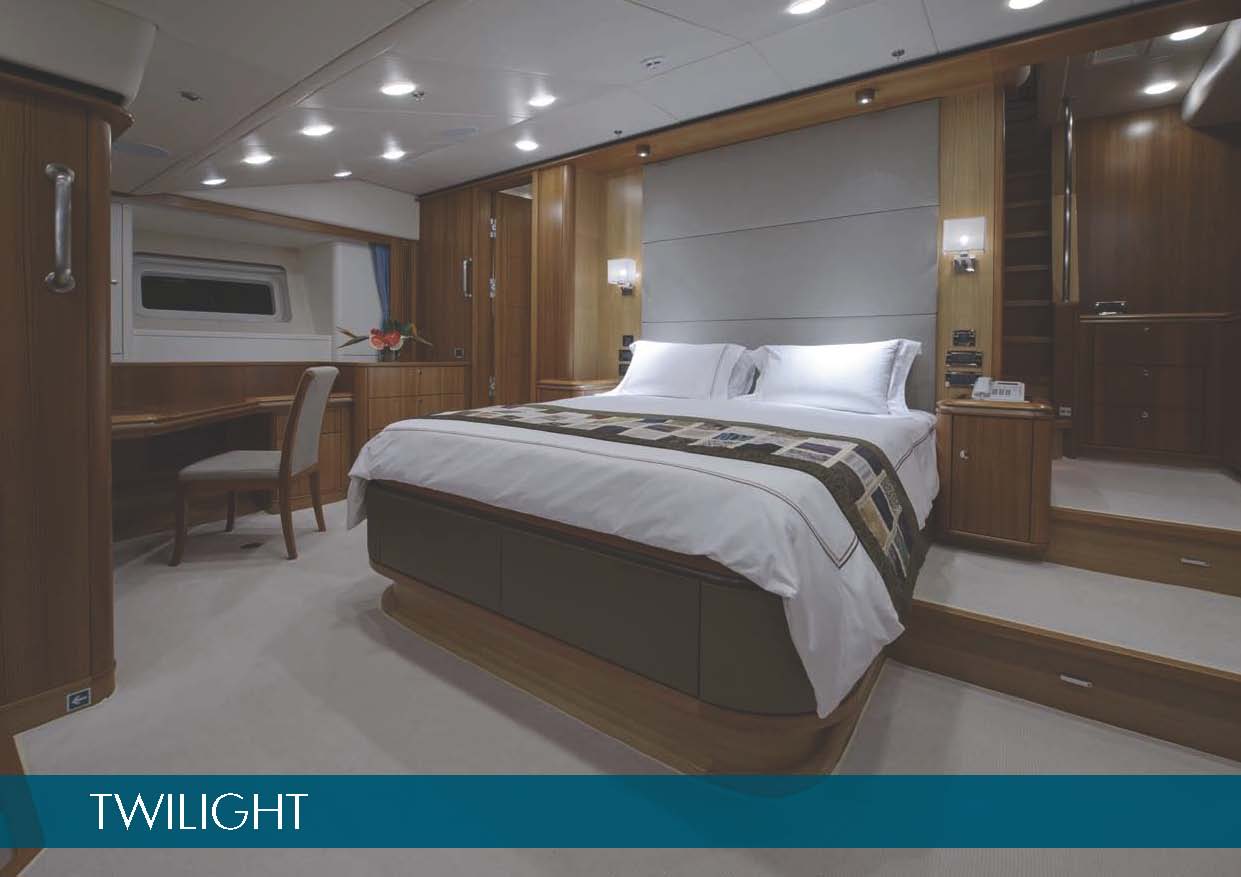 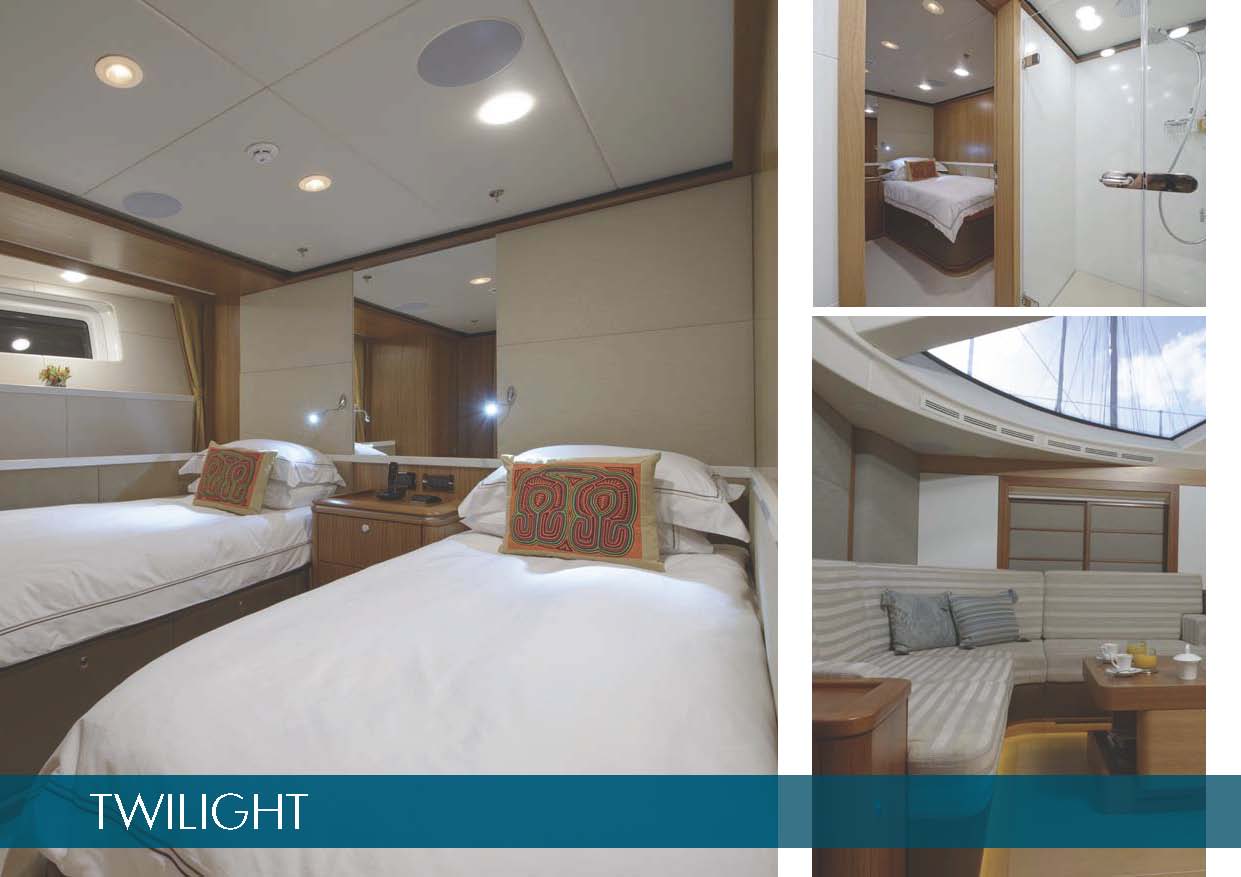 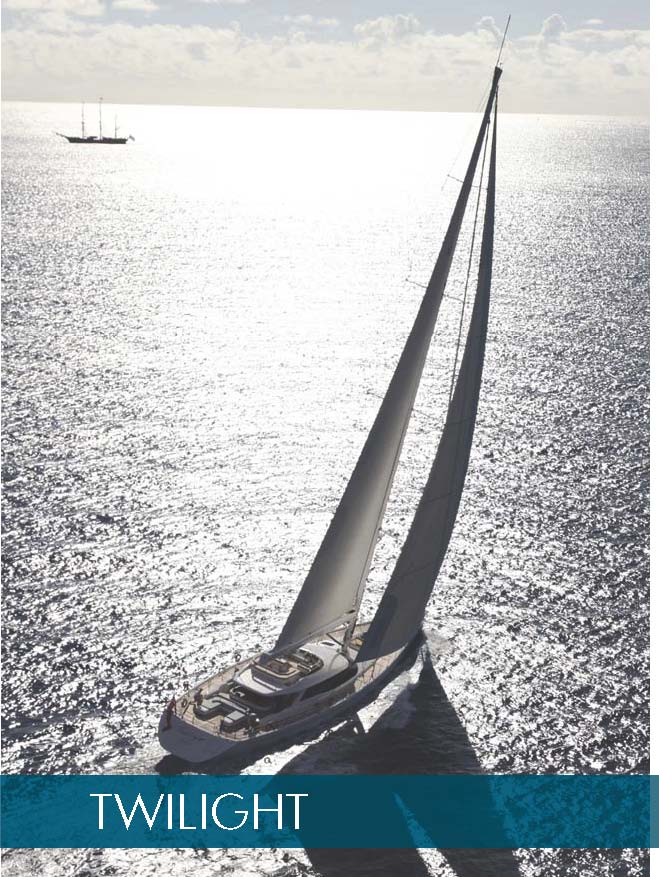 Available Summer 2017 from 1 June in Western and Eastern Mediterranean and Winter 2017-8 in the Caribbean, TWILIGHT is a 125′ flybridge sailing sloop, built in Turkey and launched in 2013. She is available for charter in the Western Med during June 2017, Croatia during July 2017 and in Turkey and Greece during August and September, 2017. With naval architecture by Ed Dubois and interior design by Oyster Marine, she is Lloyds-classed and MCA compliant, accommodating eight guests in a full beam Master King aft, plus two guest Queens that convert to Twins amidships, plus one Guest Twin… Each cabin is spacious with lots of headroom and has its own ensuite bathroom.

The owner uses TWILIGHT as a mother ship for a racing boat, so there are lots of single beds aboard, making the yacht ideal for families. The dining tables seat ten…..

Attractively appointed, TWILIGHT’s split-level, deck saloon is modern and elegant with gorgeous solid-planked wood floors. There’s an upper saloon and a lower saloon, the upper saloon being larger with windows all about and has modern, minimalist appointments. On the same level as the cockpit, the upper saloon functions as an indoor dining area, bar, and lounge, but the pilothouse cockpit, which it opens up to offers out of dining as well. A flybridge on top of the upper saloon offers a second out of door dining option as well. The lower saloon is used after dinner for watching television, which children find particularly useful… The crew adore children, and there are 2000 movies in the yacht’s Apple TVs.

While the sailing ability between men and women is naught – no difference – female captains do change the dynamic aboard a yacht, for female captains on SuperYachts is a still fairly rare. The racing owner of TWILIGHT, embraces it, however, and Captain Kathy Pennington from South Africa is justifiably proud to be one of the few female captains aboard a Superyacht. Kathy grew up sailing with her father in South Africa, who taught her how to sail. It’s as simple as that. The rest is schooling and hours at sea to get the necessary licensing required to run a 125 footer, an achievement in itself! She is assisted by fun-loving Chef Jean Matthee, an avid fisherman and sushi-maker, who has worked in some of the finest locations from the UK to Cape Town, who impresses both with his food and hospitality. Chief stewardess Christine Snyder supported herself through university by working in fine dining establishments in Savannah, Georgia, and in a relatively short period of time has clocked over 30,000 nautical miles at sea, including seven Atlantic crossings. An engineer, first mate, and second stewardess rounds out this fun-loving crew of six…

TWILIGHT has recently had an extensive refit to include a stunning dark blue hull, deck sun awnings, new interior furnishings and guest amenities.